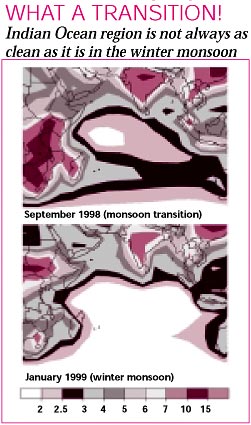 researchers from Germany-based Max Planck Institute for Chemistry have recently found that the Indian Ocean region is adversely affected by nitrogen oxide (nox) pollution from Africa and Southeast Asia during the periods between the summer and winter monsoons. nox can adversely affect atmospheric chemistry because it catalyses the production of the harmful pollutant ozone.

The findings are crucial -- current knowledge about the atmospheric chemistry of the Indian Ocean is limited due to the scarcity of long-term observations of seasonal changes. The region, however, is chemically very active because of strong tropical sunlight, and high humidity and pollutant levels.

Using a combination of satellite data of 1996-2000 and simulations of global climate change, the researchers particularly studied levels of nox during the period between the summer and winter monsoons -- the monsoon transition phase. They found that semi-regular plumes of nox extending all the way across the central Indian Ocean region originate from Africa in the west and from southeast Asia (Indonesia and other countries) in the east. "Our results suggest that the central Indian Ocean is not always as pristine as found during the winter monsoon," says Mark Lawrence, the lead researcher.

The study team also established that feedback in atmospheric chemistry can result in downwind regions being highly insensitive to upwind emissions: that is, a 50 per cent reduction in global emissions of nox from all sources might only lead to a 15 per cent reduction in its levels over parts of the Indian Ocean; and vice versa for increases in nox emissions (Geophysical Research Letters, Vol 31, No 202, August 6, 2004).

The results show that the influence of Indian emissions on the central Indian Ocean is limited to the winter monsoon period only, and is nevertheless quite weak -- a 10 per cent change in Indian nox emissions only leads to a three per cent change in northern Indian Ocean nox levels (this is due to the short lifetime of the pollutant -- about a day on an average). This finding is in sharp contrast to the strong effect of the Indian outflow of aerosols on the Indian ocean region, observed during the Indian Ocean Experiment (indoex).
The Max Planck researchers further state that the strongest influence on the central Indian Ocean nox chemistry throughout the year is from Southeast Asia. African emissions are important especially at higher altitudes. The Bay of Bengal, however, is polluted by emissions originating mainly from India (during the summer) and China (during the winter).

Indian researchers agree with the findings. "They are rather expected results," says A Jayaraman, professor, space and atmospheric sciences division, Physical Research Laboratory, Ahmedabad. According to him, the results do not contradict indoex results, as nox behaviour is in contrast to that of aerosols studied during the experiment (see box: The Indoex). "Aerosols are chemically less active as compared to nox and their scavenging mechanism is mainly physical. They do not involve chemical reactions as much as nox molecules do and hence the gradient found in aerosol amount from Indian continent to the interior of Indian Ocean is very different than that for the nox concentrations. But the results do encourage future field campaigns. This would further help explore the extent of air pollution in this region," Jayaraman concludes.