Nothing left to catch 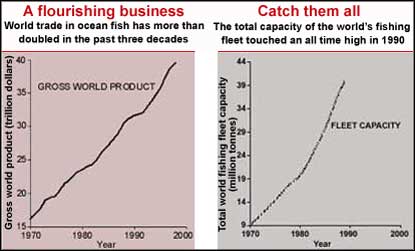 In recent times there has been an alarming trend: that of feeding ocean-caught fish to farmed fish. It takes five pounds of ocean fish to produce one pound of farmed fish, therefore putting an immense strain on the population of ocean fish. Going by the steadily decimating fish stocks in the oceans across the world, soon there may be nothing more to catch. The crisis has also escalated because most countries generate considerable foreign exchange by exporting ocean fish, demand for which has been on the rise given the decrease in agricultural yields. So governments worldwide encourage fishing activities while turning a blind eye to decreasing fish population.