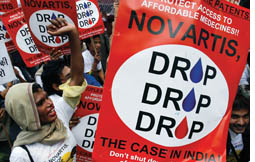 The Supreme Court today dismissed the appeal by Swiss pharmaceutical giant Novartis against the rejection of its patent application for the anti-cancer medicine imatinib mesylate (marketed as Glivec), bringing to an end a six-year legal challenge to India’s patent law.

This is the most significant case among a slew of lawsuits filed by innovator drug companies against the country’s amended patent law which allowed the patenting of chemical molecules in compliance with World Trade Organisation requirements.  The critical aspect of the Novartis challenge was to a section in the 2005 Patent Amendment Act that bars patents for insignificant improvements to an existing drug. This is Section 3 (d).

Health activists and the generic drug industry welcomed the outcome of the case which could have had far-reaching implications for both public health and the domestic industry.

The case was initiated by Novartis in May 2006 after the India Patent Office rejected in January of that year its patent application for imatinib mesylate on several grounds, including on Section 3(d) that it is simply a new form of a known substance. Since then the case has wound its way through the Madras High Court, the Intellectual Property Appellate Board (IPAB) and finally, the Supreme Court.

Relief to cancer patients
In an immediate response to the verdict, the Indian Pharmaceutical Alliance (IPA) welcomed the judgement, calling it “a landmark judgement that will serve to set at rest the controversy that was raised regarding the scope of section 3(d) in the Patents Act, which is a crucial safeguard against the extension of patent monopolies of known drugs and the consequent delay in the availability of affordable generic versions”.

IPA secretary general, Dilip G Shah, pointed out that imatinib is on the National List of Essential Medicines and is an important drug in the treatment of several cancers such as certain blood and stomach cancers. “The decision of the Supreme Court will come as a relief to patients suffering from these dreadful diseases as several Indian companies including Cipla, Ranbaxy and Natco can continue marketing imatinib at a fraction of the cost of the Novartis product,” he said.

The IPA had intervened in the litigation before the Supreme Court as Novartis had raised far-reaching questions of patent law “which could potentially impact access to affordable medicines by extension of patent monopolies to new forms of known medicines”, said its statement shortly after the bench of justices Aftab Alam and Ranjana Prakash Desai gave its verdict on Monday.

Loon Gangte of Delhi Network of Positive People (DNP+) also said the apex court decision would have a positive impact on other similar cases. DNP+ is fighting for freeing many other drugs from patents. "We are extremely pleased and relieved that the Supreme Court has recognised the public health importance of section 3 (d). We have been filing several pleas opposing patent applications on ARV medicines on the basis of section 3(d). This is a crucial victory for people living with HIV and other disease who can continue to rely on India for access to affordable treatment," he said.

Leena Menghaney of Medecins Sans Frontieres (MSF) said many medicines that MSF uses are under threat due to the flexibility of Indian law. "Novartis’s attacks on the elements of India’s patent law that protect public health have failed. The Supreme Court’s decision prevents companies from abusing the patent system to get secondary patents on existing medicines, to block price-busting generic competition on HIV and other essential medicines," she said.

Anand Grover , senior counsel and Director of Lawyers Collective HIV/AIDS unit said the Supreme Court’s interpretation of section 3(d) keeps it intact. "It gives life to Parliament’s intent of facilitating access to medicines and of incentivising only genuine research. By refusing patent monopolies on minor changes to known molecules, this judgement will facilitate early entry of generic medicines into the market for other medicines and diseases too. The impact will be felt not only in India, but also across the developing world," said Grover.

—with inputs from Kundan Pandey

A win-win solution?: A critical analysis of tiered pricing to improve access to medicines in developing countries