On June 30, NTPC Ltd., the largest power company in India floated tenders to install flue gas desulphurization (FGD) systems in 17 GW of its new coal-based power stations. The sale of the tenders closes this weekend. FGD systems are necessary to meet the new sulphur dioxide emissions norm of 200 and 100 mg/N.cu.m, notified by the Union Ministry of Environment, Forest and Climate Change (MoEF&CC).

The tenders gain prominence as the final agreement prices quoted in these will be used by electricity regulatory commissions as a reference to compare, verify and approve costs quoted for FGD by other power stations in their tariff petitions. Tariff petitions are documents filed before regulators by power stations to recover their expenses such as land cost, boiler costs, and pollution control equipment costs from the consumers. Currently, several private power stations’ petitions including Adani, Reliance and Tata have been kept on hold by the Central Electricity Regulatory Commission (CERC) due to a lack of clarity on benchmark costs for FGD systems. FGD being one of the most expensive retrofits of all the pollution control systems in power stations (a 660MW unit may need to invest roughly Rs 250-300 crore to install these systems) the sector has been reluctant to invest, seeking clarity on tariff recovery from electricity regulatory commissions.

Unlike others, NTPC plans to bear the cost of FGD based on its own balance sheet. NTPC has released tenders strategically, with plans to install FGD in its new units having mega project status—particularly the 660 and 800 MW units. Thirteen of the 17 GW of the tendered capacity are yet to be commissioned. NTPC has invited tenders from four kinds of bidders: 1) pollution control technology manufacturers with experience in installing pollution control systems in 500 MW and above power stations, 2) Boiler manufacturers having considerable prominence in the sector and capability to manufacture systems over 200 MW, 3) Service providers who can design, engineer, supply, erect, and commission systems, and 4) Large-scale engineering, procurement and construction (EPC) companies. A bidder is allowed to take up a maximum of three projects. The bidding will happen in two stages—the first stage called techno-commercial tenders which has been released by NTPC on June 30, and the second stage called the price bids which are invited to finalise the deal from a selected set of people from the first stage. NTPC’s price bids for this batch are expected in early September. This is the first bulk tendering effort to install FGD units to comply with the new emission norms in the country.

Pollution control technology suppliers believe that about 50 GW of FGD contracts will freeze by the end of this year, led by NTPC. With increasing demand, costs have been dropping. Suppliers mention that FGD bid quotes have come down to an average 35- 40 lakhs/MW this year, from 50-60 lakhs/MW last year and Uttar Pradesh Rajya Vidyut Utpadan Nigam Limited (UPRVUNL) Harduaganj contract was even lower. 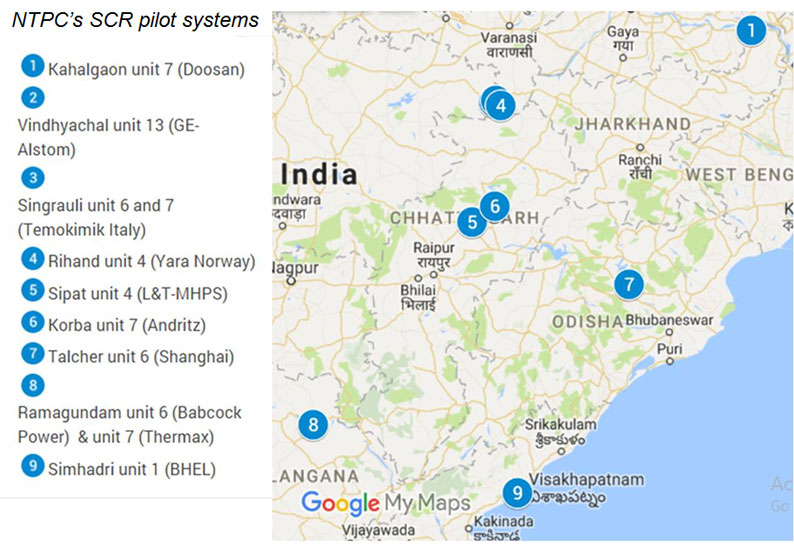 Centre for Science and Environment (CSE), public research and policy advocacy body based in New Delhi expects that NTPC, with this tendering experience, will accelerate the process of FGD systems in 500 MW units (see: Age-Unit size breakup: NTPC); also, it will complete the NOx pilots by the end of this year which should assist other companies in assessing SCR viability and efficacy.

Till date, the sector has been overstating efforts to comply with the norms, indicating unacceptable delays in compliance. The sector has been presenting varying schedules to Central Electricity Authority (CEA), a policy and research body under the Union Ministry of Power, and as a result, the body which began the exercise of compiling the FGD schedule this February, has still not finalised the plan.

Considering the space availability at thermal power stations, regional offices of CEA in February published the requirement of FGD in 51 per cent of the existing coal power stations (96 of 187 GW), which was updated as 123 of 187GW in April (or 65 per cent of the total capacity), and has now been revised to 145GW. As per the CEA, roughly 77 per cent of installed capacity will require FGD to meet the new norms, and this could increase further.

It is worthwhile to note that over 90 and 70 per cent of the installed coal-based thermal power capacity in China and United States have FGD systems, respectively. China and United States are two large countries similar to India depending heavily on coal. According to the Centre for Science and Environment (CSE), this is an overstated number. CSE’s recent report “Delayed deadline” also highlighted that installations of FGDs only in units of size 500 MW and above, adding up to nearly 90 GW of capacity, should be sufficient to meet the new norms. Investments in FGDs would translate to average generation price increase less than 20-35 paisa a unit. This means that retail power prices will increase by roughly 10 per cent.

This increase can be easily accommodated over, say, a 3-year period unlike those stated by the sector. With NTPC’s tenders and increasing demand, this cost could go down further, reports CSE. Through its green rating report “Heat on Power”, CSE had advocated for the new environmental norms for the coal-based thermal power stations in early 2015.