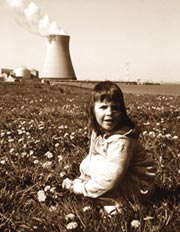 backtracking from nuclear shutdown, the eu has declared its intention of building new nuclear power plants in the coming 50 years. The excuse is climate change. The declaration came soon after the eu executive revised the proposals for nuclear safety and waste management legislation on September 8, 2004. Environmentalists allege the revision weakened the proposals, some of which imposed deadlines for dealing with high-level radioactive wastes and decommissioning of plants.

"The production of nuclear energy has been increasing. This is the reality and, with the challenge of climate change, the eu cannot avoid nuclear energy for the foreseeable future," reasoned eu energy commissioner Loyola de Palacio. She said the eu would need to build new nuclear power plants in future. Palacio also conceded that the revised legislation did not lay strict deadlines for storage schemes for radioactive wastes. The European Commission (ec) is yet to complete its inquiry into the funding of decommissioning and waste management. But the energy commissioner stressed that the new proposals contained unified standards of nuclear safety for all the 25 eu members. "These (proposals) are key instruments for ensuring greater transparency, rationalising the debate and dispelling public fears regarding this source of energy," she claimed. The proposals were first made in January 2003.

The proposal of "peer reviews" -- inspection of nuclear installations in a member country by another member's inspectors -- has also been withdrawn. Now, the eu countries will have to submit national reports on nuclear safety to the ec. Environmentalists allege that the revisions aim to favour the industry. "Nothing in the directives would substantially add to nuclear safety," alleged Mark Johnston, spokesperson of environmental group Friends of the Earth. He claimed that most eu nations would reject the proposals. The uk, Germany, Sweden and Finland have opposed the legislation in the past, saying the matter doesn't require the eu's intervention. A uk spokesman said his country hadn't changed its stand post-revision too.