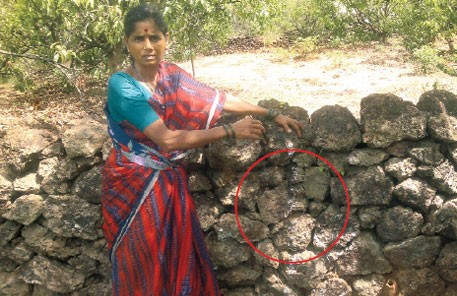 LATIKA PAWAR had just returned home after working at her mango plantation when she heard a loud noise outside. The 54-year-old called other residents and rushed to her field, a stone’s throw away from her house in Dhaniwre hamlet of Maharashtra’s Ratnagiri district. “A bulldozer was moving towards our mango plantations, which are in the vicinity of a proposed nuclear plant. Two days earlier (on May 13), boundary lines with white chalk and yellow paint were drawn through our plantations,” recalls Pawar. “Company officials (Nuclear Power Corporation of India Limited or NPCIL) were preparing to build a compound wall of the plant through our plantations,” she says. “The corporation has persistently harassed us over the past one year to extend the wall,” adds resident Mahesh Ramchandra Waghdhare. At least 10 plantations with 250 mango trees are likely to be lost if the compound wall is built, say residents of Dhaniwre.

In 2010, NPCIL acquired 938 hectares from several villages in Ratnagiri’s Rajapur taluka amid much resistance from residents who are yet to accept the compensation package. The land on which Dhaniwre sits and the surrounding area was not part of the land acquired, claim the hamlet residents. The records of Ratnagiri collectorate support their claim: survey number 119, which stands for area under Dhaniwre and its surrounding, is not part of the project site. NPCIL itself has said several times that the land under the survey number 119 will not be acquired.

Bhikaji Wagdhare, sarpanch of Madban village, which includes Dhaniwre hamlet, alleges, “NPCIL slowly wants to force out all the residents from Madban and encroach on the land to accommodate the world’s largest nuclear plant. This is why they have not yet revealed the centre point where the reactors will be placed.”

NPCIL did not respond to Down To Earth’s calls, SMSs and e-mails.

On that eventful afternoon of May 15 when the bulldozer had almost dug a pit in the ground, the hamlet residents managed to stop it. “Since we were complaining, they asked us where would we like to have the extended compound wall. We said nowhere. They promised that if the wall comes up, our plantations would not be touched and water and power arrangements would be made. But we do not trust them,” says Pawar. The bulldozer left for the day and did not return. For Dhaniwre, home to 135 people, mango is the main source of income. “We earn Rs 1 lakh annually from mangoes. This year, however, our earnings were down by half,” says Pawar.

On May 31, the sarpanch wrote to Ratnagiri district Collector Rajeev Jadhav, complaining about the encroachment and overextraction of groundwater from the project site, leading to water scarcity in Madban. Jadhav is yet to respond.

The owner of a plantation which is abutting the compound wall approached the Mumbai High Court last year. Bhikaji Wagdhare’s petition stated, “... homestead has been encroached post impuned clearance (environment clearance) issued and without following due process of law”. Before this, he had filed a complaint against NPCIL’s alleged encroachment in the Nate police station in Rajapur. “The police did not act. They said the case is not in their jurisdiction,” he says.

In its judgement, the court directed Wagdhare to approach the National Green Tribunal for the clearance-related complaint and local courts for relief against encroachment. “I suffer from paralysis. How can it be expected of me that I should follow all the local courts?” asks Wagdhare, who now resides in Mumbai’s eastern suburb of Bhandup.

Collector Jadhav admits that “survey number 119 is not included in the list of land parcels to be acquired”. He denies knowledge of any encroachment near the plant site. However, in a telephonic conversation, he added, “We have asked NPCIL not to go beyond its (boundary) limits.” When asked if any written order was sent to the corporation, he said, “Verbal communication is enough.”

Pawar rues, “We have lost our paddy fields to the plant site. If we lose mango plantations to the compound wall, survival would be difficult.”