Evidence suggests plants have a nervous system that enables them to respond to touch. 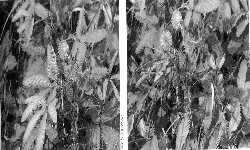 THE NEXT time you pluck a flower, take care: you could hurt it. And, if you are a plant-lover, stop talking to them and try touching them instead. Researchers say seemingly passive plants can feel and react to touch in their own special way (New Scientist, Vol 136 No 1843).

In his recent book The Action Plant, television producer and writer Paul Simons describes scientific research in the area of plant sensitivity. Ever since Charles Darwin, the father of evolutionary theory, asked medical physiologist John Burdon-Sanderson of University College, London, to test the response of the Venus' flytrap (Dionaea muscipula) to touch, scientists have been intrigued by plant reactions to touch. In India, botanist Jagdish Bose worked in this area in the early part of the century.

However, it is only now that scientists have begun to understand the molecular and cellular basis of plant response and discovered that we may have more in common with mere "vegetables" than we imagined.

When Burdon-Sanderson placed electrodes on the surface of the Venus' flytrap lobes, he discovered each time a trigger hair was touched, it fired off a wave of electrical activity similar to nerve impulses in animals. Other researchers found similar electrical impulses accompanied by leaf movements in the Mimosa pudica plant.

Although the stimulus-response system exists in plants, there are some differences between the system in plants and that in animals. Plant impulses travel much slower: Animal nerve impulses travel along nerve fibres at a rate of at least 100 metres per second, but plant impulses rarely travel faster than 3 cm a second. Plants also lack neuron networks, nerve fibres and synapses -- spaces between neurons across which impulses are transmitted by neurotransmitters. Researchers found the impulses in plants travel through ordinary cells -- through microscopic membrane pores called plasmodesmata and not through specialised nerve cells. Similar pores known as gap junctions were later discovered in animals.

Both gap junctions and plasmodesmata have a big drawback in that they transmit impulses only in a single direction. When the Venus' flytrap is hit, the whole trap is stimulated and performs only one movement. Animals, on the other hand, can respond to stimuli with thousands of muscles and glands, thanks to an intricate nervous system that works like a huge telephone exchange, constantly converting electrical signals into chemical ones and vice versa. Scientists also found that the impulses in the Venus' flytrap and other touch-sensitive plants are all produced by the rapid influx of calcium ions whereas in animals, the nervous impulse is produced similarly but is usually triggered by sodium, not calcium.

Evidence for the role of calcium in plant touch sensitivity has come from a group of cell biologists led by Marc Knight at the University of Edinburgh. They genetically engineered tobacco seedlings and inserted a gene for a jellyfish molecule called aequorin, which luminesces in response to calcium ions. Each time the tobacco plants were touched, a burst of luminescence was observed, showing calcium was being released inside leaf and stem cells.

However, nobody knows why touching a plant releases calcium. Researchers recently found that substances known as inositol phospholipids, which unlock calcium ions from special stores inside animal cells, are also released in plant cells when leaves move.


Scientists now know that touch-sensitive responses are not restricted to plant world oddities like the Venus' flytrap. More than a thousand species in about 17 families of flowering plants show touch-sensitive movements that probably depend on electrical impulses.

Even "ordinary" plants respond to touch. In the 1960s, plant physiologist Mordechai Jaffe of Athens University in Ohio, USA, discovered that gently stroking pea tendrils a few times was enough to induce the tendril's coiling, redirecting its growth from fairly straight to rapid bending. Stroking celery and lettuce plants stunts their growth, enabling them to withstand the buffeting of the wind. Touching is also known to help certain plants combat drought or chilling, although nobody knows how.

Though the exact mechanisms are not clear as yet, it is certain that touch-sensitivity in the plant kingdom is common and possibly widespread. It has been suggested the ability in plant and animal cells to sense touch evolved from a common ancestor such as bacteria, which responds to stimuli by producing electric signals. The specialised pressure-sensitivity and other sensory abilities were refined over millions of years into nerves, muscles and organs in animals and into a simple network of excitable cells in plants.