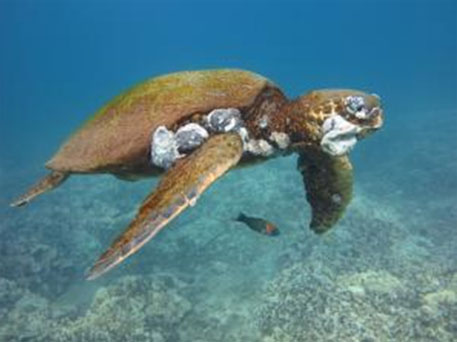 Polluted urban and farm runoff causes cancer in sea turtles, reveals a study conducted by scientists at Duke University, USA, the University of Hawaii and the National Oceanic and Atmospheric Administration (NOAA), USA.

The runoff from urban and farm areas contains nitrogen which enters the algae that turtles eat. This causes the formation of tumours in the eyes, flippers and other internal organs of green turtles. The disease is called fibropapillomatosis and is the major cause of death among these already endangered turtles.

In the study published in PeerJ, it was found that algae store excess nitrogen in the form of arginine, a type of amino acid. Arginine was present in large quantities in algae found in highly polluted waters and diseased turtles. Invasive algae called Hypnea musciformis, which can form as much as 90 per cent of the turtles’ diet, was found to have high levels of this amino acid.

”As this algae contains so much arginine and the turtles eat so much of it, the turtles have approximately 14 times more arginine in their systems than they would if they were eating native algae species in less-polluted waters,” said Kyle Van Houtan, adjunct associate professor at Duke's Nicholas School of the Environment, in an official release.

Arginine is thought to promote a virus that leads to the disease that forms the tumours. Other than arginine, the researchers also found elevated levels of amino acids that are common in human cancer tumours, such as proline and glycine.

This research is important not only for determining the cause behind the death of sea turtles but also for formulating better methods to protect other marine plants and animals that are affected by growing water pollution.

"It's not just green turtles, but fish and coral reefs also have similar diseases in these locations," said Van Houtan. He believes that if research continues to support these findings, there will emerge a serious need to reconsider current ways of managing coastal nutrients.