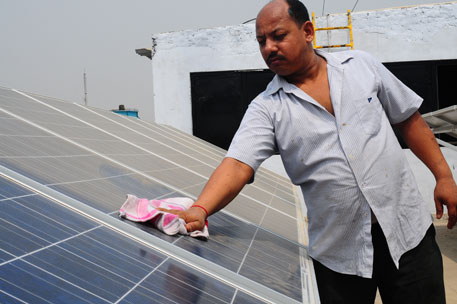 Speaking at the inauguration of a 1 MW rooftop solar plant in Khurda district, Atanu Sabyasachi Nayak, the state’s energy minister said, “The Centre should provide subsidy to power discoms to buy costlier solar power, otherwise consumers will have to bear the burden of higher electricity bills.”
Odisha is developing a 25 MW solar photovoltaic plant under its state policy. Kolkata-based Alex Green Energy won the bid to develop the plant by quoting the lowest ever tariff of Rs 7 per unit in February. But the state is reluctant to buy solar energy even at this price. “Managing things at the average conventional power tariff of Rs 3.70 per unit is difficult. How will the discoms buy solar energy at Rs 7?” asks M S Panigrahi, director (tariff) with Odisha Renewable Energy Development Agency. The state discoms are in debt to the tune of about Rs 2,266 crore.

By asking for help Odisha is trying to avoid a Tamil Nadu like situation. There the state electricity board has not made any payment to the state-based wind developers for a year. The pending amount is around Rs 1,500 crore to wind developers and Rs 5,000 crore to developers of conventional power. Tamil Nadu accounts for 40 per cent of the total installed 14,723 MW wind capacity in the country.

Payments are being delayed even in Rajasthan which is touted as the biggest solar destination in the country. “It is because the discoms are in debt amounting to about Rs 45,000 crore. But the delay is not more than 2-3 months,” says C S Chandalia, director (power trading) at Jaipur Vidyut Vyapar Nigam Limited. Rajasthan has an installed solar capacity of around 150 MW and 300 MW additional capacity is being developed.

Power companies using biomass as fuel have similar complaints. “Discoms of states like Karnataka, Tamil Nadu and Madhya Pradesh are delaying payments to us,” says D Radhakrishna, general secretary of the Indian Biomass Power Association. “We need working capital everyday to run the plant and payments form a good part of it,” he adds.

If things do not improve it can have serious implications, fear renewable energy experts and developers. “On time payment is critical,” says Gaurav Sood, managing director of Solairedirect. Today, banks refuse to finance a project if they feel that discoms of a particular state are not financially healthy. The developer then has to reconsider setting up the project in that state, he adds. Sood, by quoting the lowest Rs 7.49 per unit tariff in batch 2 of the national solar mission, is setting up a 5MW solar photovoltaic plant in Rajasthan.

M Kumaraiah, CEO of Shalivahana Green Energy Limited, which has 10.2 MW installed wind capacity in Tamil Nadu, thinks that if the situation continues, developers like him might reconsider setting up more wind plants in the state. Many developers Down To Earth spoke to see only two options if the situation persists. “Either they will not set up any more plants in the particular state or follow renewable energy certificate mechanism,” says Amitabh Tandon, managing director of Transtech Green Power Pvt Limited. The company is operating a 12 MW biomass power plant in Sanchore town of Jalore district in Rajasthan.

But the problem is that on one hand each state is obliged to expand its renewable energy base, on the other most discoms are unable to buy electricity from renewable energy developers or REC because of cash crunch. This defeats the purpose of RPOs. In the last financial year, no REC trading in solar energy took place.

Even officials in the Ministry of New and Renewable Energy (MNRE) are anxious. “Even if a few renewable energy developers fold up, the confidence in the industry will be seriously impaired,” says Girish Pradhan, secretary with the ministry.

But where will the money come from? Pradhan has a suggestion. “We may have to devise a separate mechanism to fund renewable energy,” he says. He was also quoted by media as calling upon the financial sector to look at funding renewable energy projects separately, and not combine the renewable power producers with the producers of power from conventional sources.

Some experts suggest that the national clean energy fund should be put to use, others say that the discoms should revise the tariffs paid by the consumers. Ashwin Gambhir of Prayas Energy, a non-profit based in Pune says, “states should decide realistic RPOs after taking into consideration how much of it the state discoms would be able to bear. Secondly, since the paying ability of all states is different, uniform RPOs should not be promoted in all states. All states have the mandate of 0.25 per cent solar RPO. Instead, equitable RPO should be proposed for states in proportion to their industrial, commercial and high end residential consumption.”

With inputs from Jonas Hamberg and Joel Kumar