Odisha village takes up tendu trade, but finds no buyers

Government does not provide market linkages or support price after deregulating trade in the minor forest produce. It's a conspiracy, say activists 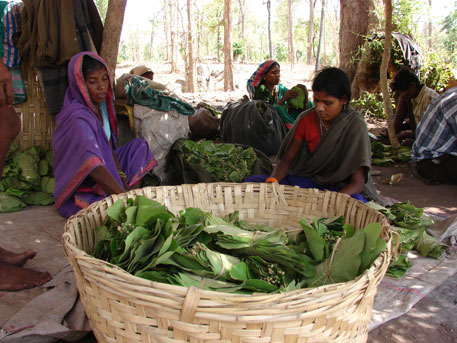 The Odisha government apparently wants to ensure that forest dwellers in the state do not demand ownership rights over tendu leaves, a lucrative forest produce. This became obvious when Narigaon, the first village in the state to attempt trade in tendu leaves, failed to even recover the money it invested in procuring and processing the leaves for lack of buyers. The government  did not provide the village with market linkages or support price for their product, despite repeated requests.

Tendu or kendu leaf, used for rolling bidis, forms a major part of the forest department’s revenue in the state. Its kendu leaf division procures the leaves from the forest dwellers in exchange for collection wages and the Odisha Forest Development Corporation (OFDC) sells them to contractors through tenders. For some forest divisions, the auction is held in advance and the procurement is done by the traders from the villages directly. The wages earned by the forest dwellers under this system is, at times, less than the government-fixed rate of daily wages. The forest department earns large profits from the trade.

The Forest Rights Act of 2006 make this practice illegal by recognising the right of forest dwellers to own, manage and sell minor forest produce such as tendu leaves and bamboo. Many villages in the state, including Narigaon, have demanded rights over community forest resources, including MFPs under the Act. Even then, Odisha, like many other states in the country, has been reluctant to relinquish its monopoly over tendu leaves and bamboo.

It came as a surprise when in April last year, just a month before the start of tendu leaf procurement season, the state deregulated tendu leaf trade in Navrangpur, one of the tendu leaf divisions, on “pilot basis to see how it works”. The villages were given the option of either giving the tendu leaves to the kendu leaf division of the forest department in return of wages as usual or procuring and selling the leaves to traders through the palli sabhas (village councils). “Activities like pruning, procurement and processing of leaves require a lot of working capital. Since most of the villages were not prepared for this investment, only one—Narigaon palli sabha—came forward to take up the trade,” said Chittaranjan Pani, a forest researcher in Odisha.

The Narigaon palli sabha raised some working capital through contributions and collected 370,000 kerries (one kerry equals 40 leaves) of tendu leaves from the village forest. The total procurement cost of the tendu leaves came to Rs 4.44 lakh, but it could only pay Rs 77,000 to the pluckers. Then there was the expenditure of Rs 120,000 on processing and transportation of leaves. At the prevailing market rates (at which the forest development corporation sells to the traders), the palli sabha would have earned more than Rs 12 lakh from the sale of leaves. After paying all the dues and cutting the expenditure, the palli sabha had planned to distribute a part of the profit among the pluckers and spending rest on the village development.

However, no trader has turned up in the village to buy the leaves. “For the last two-and-a-half months the stock is piled up in a rented godown. No trader is willing to buy. Those who do offer too little a price. That will not even pay for the expenditure that we have already incurred,” said Eswar Manjhi, a resident of Narigaon.

Bidyut Mohanty of Koraput-based non-profit SPREAD sees a conspiracy in this. “All these issues should have been sorted out by the government before deregulating the trade. As the demand for deregulation was being raised by forest dwellers throughout the state, they cleverly chose Nabrangpur division which generally has poor quality of leaves and does not give much revenue to state for this. They suddenly announced deregulation at the time when plucking season had already started. There was no capital fund provided for palli sabhas, no capacity building was done,” he said.

The traders and the forest department earn huge amount of money from the tendu leaf trade. A lot of illegal money is also involved. Since this was an experiment done on pilot basis, they seem to have been preparing a case study to show that deregulation of tendu leaves will not work, he said. This is evident from the fact that Narigaon has not got any support from the government so far for selling the tendu leaves despite their requests. The amended rules of FRA mandate the government should provide “post claim support and hand-holding to holders of forest rights”.

“Narigaon Palli sabha wrote several times to the authorities to help them sell the tendu leaves in last two months. They suggested that the OFDC should conduct auction of their leaves along with those of kendu leaf division. In return the village was even offering a five per cent commission to the corporation. The forest department said it does not have any role to play after the deregulation of the trade. The state tribal welfare department did write to the district authorities to take necessary steps to help the palli sabha but did not specify what steps. So far, no help has come,” said Pani.

Siddhanta Das, managing director of OFDC said the corporation does not have the mandate to sell the products of any agency other than the forest department, and that he has not got any instructions from the government. “We ourselves are facing problem in selling tendu leaves collected by the kendu leaf division from Nabrangpur. Only 300-400 quintal leaves could have been sold out of 15,000 quintal leaves collected here. Maybe it is because we cancelled the advanced tenders of the traders in order to deregulate the trade in Nabrangpur, that the traders are not turning up to buy the leaves from this division,” he said.

Yamini Sarangi, district collector of Nabrangpur said there was little the administration could do in the matter of Narigaon. “The tendu leaves have already been procured by a group of people on behalf of gram sabha. It was the responsibility of these people and the gram sabha to pay the pluckers and find buyers. The government had already given the people the option to sell the leaves to the kendu leaf division. Once it is procured by the third party we do not have much role to play,” she said.

Pani, however, clarified that the palli sabha had formed a ten member committee to procure and sell tendu leaves through a resolution. "By calling it individual effort, the administration is trying to give it a different picture," he said.