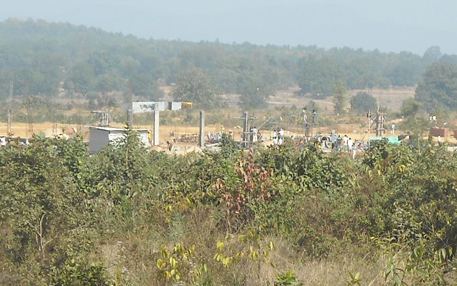 Residents of a village in Sambalpur district who have been fighting the setting up of an asbestos plant in their neighbourhood emerged victorious on July 12 when the additional district magistrate approved their decision to cancel the no objection certificate (NOC) given to the plant. Visaka Asbestos Industries was given an NOC two years ago by the earlier sarpanch of Parmanpur village. The NOC, however, was found illegal when the district administration probed the matter. Based on this illegal NOC, Visaka Industries obtained 'consent to operate' from the pollution control authority. The plant has been operational for the past six months.

Padmanav Nath, who was elected the new sarpanch on March 10, says he has been fighting this plant for almost three years and that he finally got a chance to act after getting elected. Soon after he became the sarpanch, the grampanchayat wrote a letter to the district collector, protesting the toxic plant in the village and complaining about it endangering their health. “We called an emergency meeting (of the panchayat) in June where it was noted that the plant was dangerous for the residents and was working under false information. The panchayat then cancelled the NOC given to the asbestos company,” he adds.

This cancellation was sent to the district collector on June 8 along with the letter of protest. A team of officials from the collector's office visited the village on June 25 and enquired into the matter. During inquiry it was found that the NOC had been issued on false grounds and did not take into account villagers' opposition.

“The certificate was declared illegal because the former sarpanch did not record the opposition to the plant; he did not hold a gram sabha (village council) meeting to discuss the matters concerning this factory; and he gave incorrect information. He said the plant’s location would be two kilometres from the village, whereas in reality it is just half a kilometre from the village,” says Nath.

After the company got the NOC from the previous sarpanch, it procured the consent to operate. Villagers say trucks carrying asbestos sheets make approximately 50 to 60 trips from the factory daily. The company's EIA states that it produces 216,000 tonnes of asbestos sheets per year. Nath says that soon the villagers might need to approach the authorities to take action against the factory as it shows no signs shutting down.

Gopal Krishna of ToxicsWatch Alliance says that plant should not have become operational in the first place as the NOC was based on false information and even the EIA was not provided in the regional language to the villagers. He adds the company has filed an application with the state pollution control board, requesting for renewal of licence and increase the plant's capacity to 250,000 tonnes of asbestos cement sheets per year.