Of pug-marks and prowls 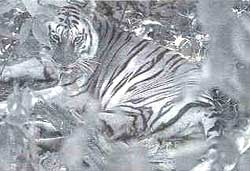 THE main objective of the research con- ducted by P C Kotwal and Rajesh Gopal (officers involved with Project Tiger) was to observe the loyalty tigers felt towards their respective domains. The patterns of behaviour exhibited in the post-natal period were also under scrutiny. The experts conducted their research at the Kanha National Park in Madhya Pradesh. Their decade-long study using radio-telemetry tracked the movements of four tigers ( three females and a male) (Tiger Paper, Vo122, No 4).

The sociology of tigers reveals that every male has a territory of his own, which is heavily marked for recognition by conspecifics. When a tiger has an oestrous female in his territory, she is guarded even more fiercely, with additional markings. Within this territory live one or more tigresses who maintain their exclusive areas. The male tiger has the right to mate with all these females.

According to the study, tigresses are more loyal to their territories for longer periods of time. It was also noticed that females had a tendency to remain in or around their birthplace, exhibiting philopatry, the urge to return to the birthplace. It was not unusual to find mothers and daughters occupying adjacent territories and there have been no records of internecine combats. Kotwal and Gopal observed that during the courtship and mating periods, the land tenure system of the females was maintained, but with the arrival of the young ones, it underwent modification.

In the post-natal period, the females not only demarcated their intra-sexual, but even guarded their inter-sexual territories very closely. These areas were set apart by vocalisations, scraping, urine and faecal deposits and the clawing of nearby trees. The study also substantiated earlier research on post-natal care and its effect on the land tenure system. It was observed that after the birth of her cubs, a tigress was seen to have shrunken her territory from the normal 980 ha to 500 ha, for a period of 17 months. This pattern could be justified by taking into account the fact that small cubs require attention and it would facilitate the mother if she were to manage a smaller area in such a situation.

The males on the other hand, abandoned their territories and moved around in search of new sites rather frequently. They often ended up fighting with the tiger dominant in a particular area, and in most cases the duels proved fatal for one or both of them. These skirmishes generally took place in areas which were not well-defined.

Two factors seem to give rise to this flexibility in the male notion of territory. Firstly, the need for food and cover force them to enlarge their existing ranges of authority. The home range of the male, however, reduces by a sizeable extent if sufficient prey is available in the marked region itself. Philopatry among the females, could be the other reasons behind the tiger's wanderlust. Due to a high degree of relatedness between neighbouring females, male genes may not spread in the population. Therefore, the males may have this inherent propensity to move away from a certain area after some time, to ensure the dispersal of their genes. Kotwal and Gopal suggest that the land tenure system adhered to by tigers should be redefined in terms of females, as their inclination towards site fidelity and territorial stability is much stronger than that of the males.

Infanticide by males was also a common occurrence. The death of a cub results in the female attaining an oestrus condition (she is in heat and ready to mate). That males have these murderous tendencies towards cubsseems to be the reason why the females hide their young ones in places inaccessible to their larger spouces. The cubs too have been observed to respond to the typical vocalisation of their mothers.