Of ups and downs 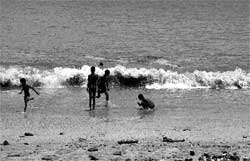 scientists in Canada say that much of the long-term changes in sea level in history are merely an illusion. According to John Mound of the University of Toronto, Canada, mirage is caused by tiny shifts in the orientation of the Earth's rotational axis that alter the distribution of water. A decade ago, geologists working for the us -based oil giant, Exxon, gathered the records of how global sea level has changed over millions of years. The findings show that global sea levels have fluctuated nearly 200 metres (m) over the last 130 million years (Science , Vol 279, No 5350).

Some geologists have generally accepted the estimates. However, they are still not able to explain large fluctuations. It is known to scientists that sea level can change by more than 100 metres. The reasons: growth and shrinking of polar ice sheets.The Exxon data show large variations at times when the planet had no known widespread glaciers.

Mound and his team-mate Jerry Mitrovica suggest that a significant fraction of the apparent changes may arise from differences in water distribution arising from changes in the orientation of the Earth's rotational poles. Over millions of years, the planet's rocky outer mantle and crust have slipped slightly over the liquid layer covering the metallic core. And it moves over the rotational pole. This motion, which is called true polar wander, amounts to a fraction of a degree every million years, moving the continents and oceans relative to the equator.

The researcher says that the motion changes the force as the Earth rotates on its axis. He says that both force and rotational speed increase as you move towards the equator, so moving continents and oceans deform - just as the Earth bulges as the equator.

Mound points out that the fluid oceans respond more than the crust. "Because the oceans deform differently from the solid earth, you see changes in sea level," he says. Some parts of the Earth would see rising oceans, while others would see drops in sea level.

The researcher argues that Exxon geologists collected their data largely from the North Atlantic. The resear-chers have calculated that between 130 and 50 million years ago, when the North Pole moved from central Greenland to the Arctic Ocean, the average sea level in that region should have risen over 50 m. And there would have been inverse in the oceans surrounding Japan. However, Exxon data does not have proper mention about the regions. Mound predicts that there will be global sea level chages.