Residents had complained to chief minister Kejriwal during janata durbar; plant shut for now because of boiler malfunction 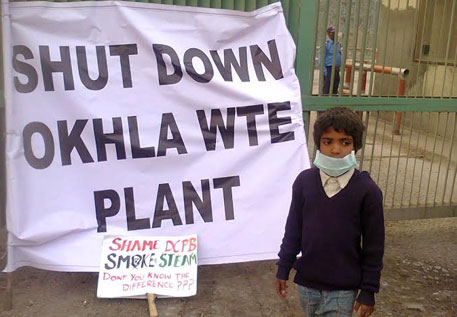 The Delhi Pollution Control Committee (DPCC) has issued show cause notice to the waste to energy plant in Okhla in south Delhi, managed by Jindal Urban Infrastructure Limited, for excessive ash fall and also for violating the Air (Prevention and Control of Pollution) Act. The plant has been shut down for now since its boiler is not working.

A team of scientists from DPCC and the Central Pollution Control Board (CPCB) had visited the plant and its neighbourhood for spot inspection on Friday and found that the emissions from the plant were above normal. It has given the plant managers 15 days to file reply.

The plant has been at the centre of a controversy ever since it was opened. Residents of nearby colonies, including those in Sukhdev Vihar, environmental organisations and waste pickers have been demanding its closure ever since its construction began. Sukhdev Vihar Residents Welfare Association is fighting a case in the National Green Tribunal (NGT). Even during earlier inspections by teams formed by NGT, it was found that emissions from the plant were toxic. The next date of hearing in NGT is on January 15.

Resident welfare organisations along with non-profit ToxicsWatchAlliance (TWA) had submitted a letter to Chief Minister Arvind Kejriwal at the Janata Durbar on Saturday, informing him about toxic ash that fall on roofs of the houses in the locality. They also submitted photographs.

The letter alleged that Jairam Ramesh, during his tenure as Union minister of state of environment and forests, had written to Sheila Dikshit, former chief minister, highlighting the violation of environmental regulations by the Okhla plant operators but she chose to ignore the letter. It also demanded an inquiry into the circumstances under which this plant was given clearance, alleging it was based “on fake public hearing and misleading facts presented in the plant’s Environment Impact Assessment (EIA) report”.

Sandeep Mishra, member secretary of DPCC, confirmed that the show cause notice was issued to the plant on Friday after the inspection and its copies were sent to South Delhi Municipal Corporation.

Asha Arora, member of the Sukhdev Vihar Residents Welfare Association, said that it is a relief that the DPCC has taken some action after so many years of protests by the residents of Okhla. However, a permanent measure is needed. She said that the association have received an acknowledgement letter from CM's office.