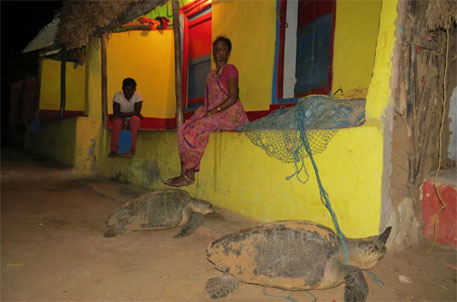 Hundreds of disoriented Olive Ridley sea turtles have laid eggs in seaside villages near Odisha’s Gahirmatha Marine Sanctuary. Light pollution and lack of space on the beach are believed to be behind the turtles’ disorientation. Nearly 50,000 turtles returned to nest at Gahirmatha, the world’s largest rookery for sea turtles, after a gap of two years.

Rabindra Mohan Sahoo, secretary of Rushikulya Sea Turtle Protection Society, said on Monday, “Around 2,500 turtles laid eggs in front of houses of many village residents. They were attracted towards the light in villages. Few turtles also climbed onto the verandas and houses in our village, Poramapeta.”

Village residents reported that many turtles were unable to find their way back to the water from the villages and had to be helped to reach the sea after they had laid eggs. These villages include Barahapur, Kanhupur and Pentha near Gahirmatha in Kendrapada district. Down To Earth had reported that many turtles were laying eggs in the same pits as others and thousands of eggs had been destroyed in the process.

Sahoo explained that some fishermen had docked their boats on the beach, due to which turtles lost their nesting ground and headed for sandy areas in the villages. “Disoriented turtles often die of dehydration or are preyed upon by dogs and jackals,” he added.