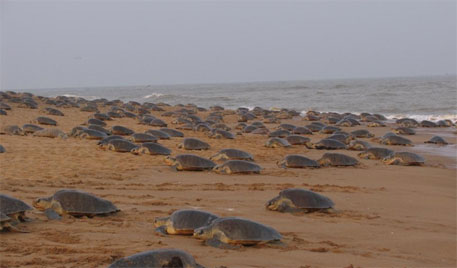 Much to the delight of turtle lovers and researchers, the long-awaited mass nesting phenomenon of Olive Ridley sea turtles began at the beach of Gahirmatha Marine Sanctuary on Wednesday. Gahirmatha in Kendrapada district of Odisha is the world’s largest rookery of sea turtles. Last year, the turtles had skipped the sanctuary.

Around 30,000 turtles have laid eggs at another nesting site at Rushikulya beach in Ganjam district.

The turtles, which had already congregated in the sea near Gahirmatha beach, came ashore for nesting in groups of nearly 2,000 to 5,000 each. Nasi-1 and Nasi-2 are tiny islands spread over six km and are best suited to nesting since they have neither predators nor any human habitations. The turtles initiated nesting at about 10 pm on Wednesday and continued throughout the night and dawn. The arribada will continue for a week, said the forest officer.

Many turtles are laying eggs in the same pits as others and thousands of eggs have been destroyed in the process. Since there is very little space left, the forest officer explained that many female turtles have returned to the sea and will emerge only after a few days.

Turtle eggs normally take 45 days to hatch. Hatchlings then emerge from the nests and make their way to the sea.

Bright lights from the missile test range at Wheeler’s Island near Gahirmatha had been an impediment to the arrival of the turtles last year. This year, defence officials have switched off lights at the test range, causing turtles to return to Gahirmatha for mass-nesting, the forest officer said.

About 50 forest guards and other forest officials are now guarding the nesting beach and the sea to protect the turtles and their eggs. Forest officials have decided to not allow any tourists to the sites as they are now under the jurisdiction of the Defence Research and Development Organisation (DRDO). Anyone wanting to visit the rookery site will have to seek permission from the DRDO.

The state government has imposed a ban on fishing activities inside the Gahirmatha sanctuary from November 1 to May 31 to protect the turtles. Forest officials have already arrested around 130 fisherpersons and seized about 35 fishing vessels on charges of illegal fishing in Gahirmatha.

The rookery at Gahirmatha was declared a marine sanctuary in 1997 by the state government. The Indian Coast Guard and the forest department have established 16 camps to guard the turtles and to prevent the entry of fishing vessels. Surprise raids are carried out on fisherpersons to prevent them from fishing within turtle congregation areas, said the forest officer.