On the trail of tsunami

Since the 2004 tsunami, scientists have moved closer to understanding and predicting its trigger, the tectonic earthquake. Are governments prepared to benefit from the knowledge? 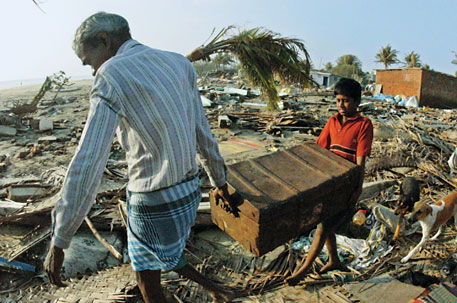 For over five centuries the earth had struggled to maintain its composure, bowing here and bending there, yet somehow withstanding the mounting pressure. Far beneath the surface, the Indo-Australian tectonic plate was subducting under the Sunda plate, but near the surface these plates had locked together, accumulating historic levels of tension along a huge stretch of the Sunda megathrust. Then, in a decisive moment on December 26, 2004, the earth shrugged off its strain. In a matter of seconds, 1,600 kilometres of ocean floor broke free and lurched upward, like a compressed spring suddenly released. The displacement was later calculated to be as high as six metres. It was this incredible force of displacement that triggered the tsunami of 2004, killing 23,000 people and causing incalculable loss of livelihood.

The tsunami could not have been prevented, but it could have been anticipated, and the loss might have been greatly reduced. Despite the uncontrollable chaos we associate with natural disasters of this scale, there are rules and patterns governing even the greatest earthquakes and tsunamis. Over the past decade, scientists studying the Sunda megathrust have made great strides in understanding some of these patterns (see ‘Many faults of Sunda megathrust’).

The Sunda megathrust, which arcs all the way from Myanmar to Australia hugging the western coast of Sumatra, is replete with seismic activities throughout much of its 5,200 kilometres length. Scientists have long known that the strain accumulated in megathrust faults such as the Sunda are responsible for earthquakes of moment magnitude 9.0 (a measure of total energy released by an earthquake) or higher.

But very few earthquakes are that powerful—only five have occurred since 1900; the 2004 earthquake was by far the deadliest one.

In 2005 when another earthquake hit the Aceh region of the Sunda megathrust that had ruptured the year before, it was thought to have released remainder of the accumulated tectonic strain in that region. Attention then turned to the portion of the Sunda megathrust just south of the equator, now thought to have the greatest accumulated strain and high earthquake potential. This danger zone lay between the Mentawai islands and the city of Padang in Sumatra.

To predict the threat of earthquakes and tsunamis in the Mentawai region, scientists led by Kerry Sieh, director of the Earth Observatory of Singapore, started measuring “uplifted coral micro-atolls” off the Mentawai islands. These micro-atolls are colonies of corals that protrude from the water due to the upliftment of the ocean floor during a major earthquake. The micro-atolls off the Mentawai islands provided an excellent measure of the timing and strength of recent earthquakes, as well as ones that occurred hundreds of years ago (see ‘Coral clock’).

Sieh and his team used this coral data to reconstruct the region’s seismic history. And in the process, they noticed an interesting pattern. At the time, it was already well established that powerful earthquakes return in a cyclic pattern. Says Sieh’s colleague, Belle Philibosian, “Tectonic stress on a fault builds up over a long period of time—usually hundreds or thousands of years—before being released in an earthquake, after which stress builds up again and the cycle repeats.” But with the temporal and spatial precision offered by the corals, Sieh and his colleagues noticed an additional feature: during each cycle, a cluster of earthquakes occurred together, much like a series of hiccups, over the course of a few decades. Sieh termed the phenomenon a “supercycle”. “The reason I coined that term is that we had been talking for a century or so about earthquake cycles—about strain accumulation and release. And here we had strain accumulation and partial, partial, partial release,” Sieh told Down To Earth.

Since the last cluster of large earthquakes in the Mentawai region had occurred in 1797 and 1833, the coral data indicated that a new set of earthquakes was overdue. “Just after we made the discovery—the paper had gone to the press, but not yet been printed—the first of the most recent cycle began in September 2007,” Sieh recalls. The earthquake that struck the Mentawai region was of 8.5 magnitude. Sieh’s work on supercycles which had anticipated the earthquake was published soon after in Science in 2008. Now, there is widespread consensus that the 2007 earthquake marks the beginning of the latest cluster, and that there is at least one more great earthquake to come. Philibosian explains that “in previous supercycles, the ruptures have not been more than 40 years apart, so it is very likely that at least one more major earthquake will occur by 2047.”

The prediction is not based on historical precedent alone. In a 2014 paper in Journal of Geophysical Research, Philibosian and her group confirm that the majority of the Mentawai segment of the Sunda megathrust continues to bear significant accumulated stress which could cause a massive rupture at any moment. What matters is the strain that has built up since the last rupture, she says.

Several other portions of Sunda megathrust also have significant earthquake potential. Of particular risk to India is its northern extension near Myanmar.

The last giant earthquake near Myanmar, known as the Arakan, occurred in 1762. As per a 2013 paper by Wang Yu of California Institute of Technology, published in Journal of Geophysical Research, the supercycle period of the northern region is estimated to be 500-700 years. However, Wang Yu cautions, “It is very likely that we would have some earthquakes smaller than the magnitude of the 1762 earthquake strike this section in between these giant events.”

Explaining the potential for tsunamis, he says, “An earthquake of magnitude greater than 7.0 results from a megathrust rupture at a shallow depth and is very likely to generate a tsunami wave in the Bay of Bengal. It does not necessarily mean that the wave would be big, because the water depth in the Bay of Bengal is quite different from the water depth near the Andamans.”

There is also evidence of a continued risk of earthquakes in the Acehnese portion of Sunda megathrust that ruptured in 2004, according to a study by Aron Meltzner of Caltech, which was published in Journal of Geophysical Research in 2010. The last great earthquake cluster in that portion probably occurred between 1390 and 1450.

Meltzner and his colleagues have estimated the amount of strain stored in the fault since 1450, and it amounts to double the estimated amount released in 2004. Besides, Meltzner explains, “In the earthquake sequence between 1390 and 1450, the total amount of strain released was much more than in 2004. If such a large amount of strain was released over a matter of decades at some point in the past, it can happen again.”

The improved understanding of earthquake patterns in the past decade has no doubt enhanced scientists’ ability to monitor and predict earthquakes and tsunamis. “Virtually all we know of offshore Sumatra (the Sunda megathrust) has been learned in the past 10 years,” says Sieh. The scientific breakthroughs over the last decade have heavily relied on the GPS data combined with measurements of coral micro-atolls. The Sumatran GPS Array has been greatly expanded, from just six GPS stations during the 2004 earthquake to 49 stations now, many of which lie directly above the locked sections of the Sunda megathrust. Countries have also put tsunami warning systems in place. The Indian Ocean Tsunami Warning System, which became active in 2006, may have reduced the damage of the 2012 Indian Ocean earthquakes.

Despite these improvements, the fact remains that scientific discoveries alone cannot reduce loss or damage until public awareness, emergency response preparedness and infrastructural resilience occupy a prominent place in the government agenda. Consider Padang in Sumatra. The city, home to almost a million people, is likely to be near the epicentre of the upcoming earthquake in the Mentawai region, and would face the brunt of the resulting tsunami. “Some non-profits have been working on public awareness and evacuation exercises. But our study shows that only 10 per cent of the 500,000 exposed would be able to get out of the flooding zone by the time the tsunami hits the coastline,” says Sieh. This is because preparation efforts are much less than the effort required, he adds. “Padang is a big town and there is too much to do. Those in power do not want to think about an event that may only occur in 25 years. It’s somewhat like our response to climate change—we make our living, burn our coal, and if it happens it happens.”

In an article written prior to 2007 earthquake, Sieh stated that, “Maintenance of this status quo throughout South and Southeast Asia will prove tragic and expensive, for without strong chains linking scientific discovery to mitigation, other events as profoundly disturbing to human well-being as the 2004 tsunami will strike elsewhere in the coming century.” His words remain relevant today.