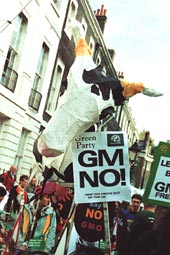 October 16, 2003 saw the release in the uk of Farm Scale Evaluations of GM Crops , the largest-ever field trials to be hitherto held. Commissioned by the uk government in 1999, the crops on trial were Bayer's oilseed rape, maize and fodder beet, and Monsanto's sugar beet. According to the results, gm beet and gm oilseed rape are a no-no. Growing them would hurt birds and insects. But researchers gave maize a thumbs-up.

Now the biotech industry must legally forward the results of the trials to the European country where they have applied to market the crop: Belgium for oilseed rape and sugar beet; Denmark for fodder beet, Germany for sugar beet and France for maize. Meanwhile, Friends of the Earth, a non-governmental organization (ngo) has asked for a ban on beet and oilseed rape, and criticized the maize trials, saying it does not represent how farmers would actually grow the crop.

If consumer anger against gm crops prompted the uk trials, in Mexico it was the growing contamination of native varieties of maize by gm strains -- these strains are either grown illegally in the country, or affect native varieties from across the border Mexico shares with the us -- that prompted indigenous farming communities from four provinces, along with ngos like the Action Group on Erosion, Technology and Concentration, to carry out an independent study. gm contamination was found in 24 per cent of all native samples, drawn from 33 communities across nine states in Mexico. The strains found included Aventis product Starlink, a maize variety not approved for human consumption because it contains an allergen.