On WHO agenda: a global vaccine action plan 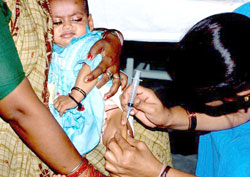 When the global health leaders meet in Geneva from May 21 to 26 for the World Health Organization's 65th General Assembly, introducing new vaccines in the low- and middle-income countries would be high on their agenda.

A “global draft vaccine action plan”, available on WHO's website, details the implementation strategy for the next decade (2011-2020) for preventing diseases through increased use of existing and new vaccines. This action plan would be discussed in the meeting.

Vaccination prevents an estimated 2.5 million deaths each year, according to WHO. It adds that use of 10 vaccines alone in 94 countries in this decade can avert between 24 and 26 million future deaths compared to a hypothetical scenario under which vaccines have zero coverage. The 10 vaccines are for: hepatitis b, influenza-type b, human papillomavirus, Japanese Encephalitis, measles, meningococcus A (causes meningitis), pneumoccus (causes diseases like pneumonia, sepsis, meningitis), rotavirus (causes diarrhoea), rubella (attacks pregnant women and affects unborn children, causes birth defects) and yellow fever.

However, the civil society groups working in the health sector have their reservations about the new policy which would result in new vaccines  flooding low- and middle-income countries. While the coverage of existing vaccines remains low, introduction of new vaccines is not a good idea, says Médecins Sans Frontières (MSF), an international non-profit in a recent press release.

“The new vaccine plan may fail to deliver unless it directly addresses the weaknesses in the ongoing routine immunisation programmes in the countries,” says MSF. It adds that most vaccines available today are administered as injections, requiring trained health workers, whose numbers are low in poor countries that have limited health staff. Reaching the vaccination centres and logistics, such as keeping vaccines in cold storage when there is limited refrigeration capacity and unstable electricity supply, can be challenging. “Nineteen million children are being missed (for immunisation) globally each year and this challenge must be explicitly addressed,” it adds.

In India, despite the national universal immunisation programme (UIP) going on since 1985 (prior to it, the country has an Expanded Immunisation Programme from 1978), only 61 per cent children between 12 to 23 months are fully immunised, according to UNICEF's 2009 report. The figures are lower in states with poor health infrastructure. Children in the same age group who never received any vaccination is high at 7.6 per cent.

Under such a scenario, focusing on new vaccines without boosting the existing system will not benefit most children, says Estrella Lasry, tropical medicine advisor to MSF. “The global vaccine action plan works on the assumption that basic vaccination programmes are going well, and that's just not the reality in many places where we work,” she adds.

Do we need new vaccines?

Meanwhile, in India, the debate on the need for new vaccines continues. India already has vaccines for diphtheria, pertussis (whooping cough), polio, measles, tetanus and tuberculosis in its UIP. The vaccine for Japanese Encephalitis is given in high disease burden districts of 15 states. From December 2011, the Union health ministry approved including  hepatitis b vaccine in the routine immunisation of Kerala and Tamil Nadu and by October 2012, five more states—Gujarat, Haryana, Karnataka, Goa, Jammu and Kashmir—and the Union Territory Puducherry, too, will get the same vaccine. But without enough evidence of hepatitis b affecting children in India, this move by the government has been questioned. (see 'Pentavalent vaccine approved in five more states...')


The three new vaccines available globally, which have still not been scaled up in India, are pneumococcal, rotavirus and human papillomavirus. There are talks that the rubella vaccine would also be included in the UIP in India by the end of 2012.

Meanwhile, efficacy of the new vaccines in the pipeline has not been established on the Indian population. Doctors feel that before these vaccines are included in Indian immunisation programme, it must be ensured they are safe and effective. “All the efficacy tests for the pneumococcal and rotavirus vaccines have been conducted in the Western countries. But whether these vaccines suit the Indian population will have be first checked,” says Vipin M Vashishtha, pediatrician and national convener of Indian Academy of Pediatrics's Committee on Immunisation.

Conflict of interest in WHO?

The experts tracking issue relating to vaccines in India see an invisible hand of the vaccine manufactures pushing for new vaccines through WHO. Most of the funding for WHO comes from Bill and Melinda Gates Foundation and the Global Alliance of Vaccine Initiative (GAVI) Alliance, a group of individuals and organisations advocating the use of vaccines. A dominant member of the GAVI Alliance is the Bill and Melinda Gates Foundation, which is also on its board. GAVI Alliances' board members are individuals owning private health care companies in India (Ashutosh Garg, founding chairman of Guardian Lifecare Pvt Ltd, India’s largest chain of health and beauty stores) and vaccine industry from developing and developed countries. Also, Bill and Melinda Gates Foundation was one of the biggest donors to WHO in 2010-11 after it gave US $446,161,801. Hence, a clear-cut conflict of interest. (see 'Vaccine eloquent')

India, however, remains an attractive destination for spread of vaccines because its immunisation program is one of the largest in the world in terms of quantity of vaccines used, number of beneficiaries, number of immunisation sessions organised and the geographical spread and diversity of areas covered.