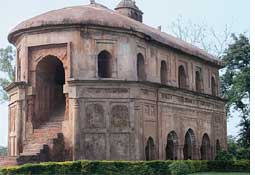 ongc's seismic surveys in an oilfield in Assam have caused damage to an 18th century amphitheatre, say Sibsagar township residents who plan large-scale protests against the oil giant. An Archaeological Survey of India (asi) monument now, Ahom kings used the two-storey structure of red bricks as the royal sports pavilion.

In a seismic survey, controlled explosions are carried out underground, usually below 18m, and sensors are placed to pick up the vibrations. Data collected by the sensors are then used to determine whether the area has hydrocarbon. The survey at the Rupohipathar oil field caused several 10m wide cracks on the walls of the monument, called the Rang Ghar. They were first noticed towards the end of February and reported to asi.

"We are examining and have put up devices in the cracks to confirm if indeed they are widening," says Sanjay Manjul, superintendent archaeologist of asi. He also said that the asi was powerless to stop ongc from conducting the survey since it was being done outside the notified zone of the monument. The survey was conducted 2.5 km away from the amphitheatre.

Under the Ancient Monuments and Archaeological Sites and Remains Act, 1952, and Rules, 1959, any activity within 300m of an asi monument is prohibited. Manjul, however, added that they had received complaints about other heritage monuments getting damaged. "We will look into that. If necessary, we will go for legal action against ongc," says Manjul.

Residents living in adjoining areas allege the oil giant is carrying out explosions far above the permissible 18m limit, leading to damages in residential buildings and other structures. "ongc contractors conduct surveys within a five-km radius of the monuments and just 4.5m below the surface," says Sudipta Nayan Goswami of Sneha Tirtha, an organization working on conservation of monuments in the region. But according to Dilip Das, deputy general manager (public relations), ongc, "We have taken adequate precaution to ensure that no damage occurs."

The state has constituted a seven-member expert committee to study the damages. The committee will work out a plan on what needs to be done," said Gautam Bora, the cultural affairs minister of Assam. Pradyut Bardoloi, the state industry minister, promises "adequate action" after the committee's report.

The student organization of the Ahom ethnic community, All Assam Tai Ahom Students Union, has threatened an indefinite bandh if the amphitheatre is damaged further. The United Liberation Front of Assam has also warned ongc of dire consequences.