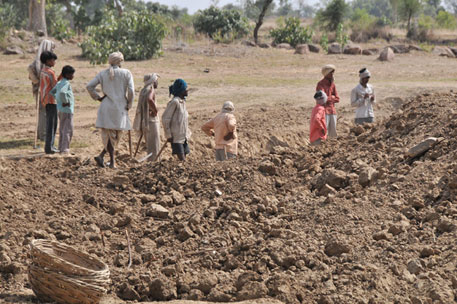 The winter session of Bihar Legislative Assembly was disrupted for the third consecutive day on December 5 over an alleged scam of Rs 5,977 crore in implementation of the Mahatma Gandhi National Rural Employment Guarantee Act (MGNREGA).

The opposition is demanding an investigation by the Central Bureau of Investigation (CBI) on the basis of the report published by a Delhi-based non-profit, Centre for Environment and Food Security (CEFS). The non-profit, in its report, has said that nearly 73 per cent of the funds, amounting to Rs 5,977 crore, have been siphoned off from MGNREGA schemes in 38 districts. The report says that most of the funds were meant as payment for labourers.

On the first day of the winter session on Monday, the Rashtriya Janta Dal (RJD) members proposed a special motion to discuss the scam. Speaker of the House, Uday Narayan Choudhary gave the go-ahead. Leader of opposition, Abdul Bari Siddiqui, promptly demanded a CBI probe.

Siddiqui charged rural development minister Nitish Mishra of being directly involved in the scam. Mishra, while addressing the Assembly, termed the CEFS report wrong and politically motivated. “The report’s sample survey is only 2,500 households. Such a small sample size cannot depict the picture of entire MGNREGA scheme in the state,” he said.

The report by the non-profit has a sample size of 25 households in 10 extremely backward dalit villages of the state. The study was conducted for the years 2006-2012. It says 73 per cent of the wages has been misappropriated by fake job entries and muster rolls.

In a bid to control defuse the situation, Mishra said that the state government had constituted series of inquiries months before the CEFS report was published. “We had constituted inquiry into 8,436 panchayats; till date report has been prepared for 3,416 panchayats. We have also initiated action against 47 mukhiyas (village heads) and FIRs have been lodged against 200 people,” he said.

The discussion took a political turn after Siddiqui alleged that the scheme’s funds are being used to publish fake magazines and journals, highlighting the success of MGNREGA in the state. Mishra refuted the charges.

He alleged that CEFS studies are politically motivated. He accused the organisation of conducting studies in non-congress led states. In 2007, it prepared a similar report on Odisha and then Bundelkhand. “Now, Bihar is being targeted,” he said.

A minister of the ruling National Democratic Alliance (NDA) in Bihar termed the report a “bundle of jokes”. He said the Union government has granted Rs 9,000 crore for MGNREGA in the state and expressed incredulity at the CEFS report claim that nearly Rs 6,000 crore has been siphoned off.

The minister also hinted that the CEFS report is plagiarised. The wording of the CEFS reports for Bihar, Odisha and Bundelkhand are strikingly similar. The verbal duel between Siddiqui and Mishra led to a commotion in the House when health minister, Ashwini Choubey started shouting, questioning the truth behind the Opposition's claims.

Members of the Opposition alleged that ruling party is ducking questions about the scam. They staged a walkout, demanding CBI probe into the scam. Siddiqui claimed that government is getting cold feet over the poor implementation of the MGNREGA. On Tuesday, the second day of the winter session, RJD member members met governor Devanand Konwar and submitted a petition for CBI probe into the MGNREGA scam.

The final day of the Assembly’s winter session witnessed more uproar over MGNREGA and the stampede that had marred Chhat festivities. The Assembly had to be adjourned till 2.00 pm. The final day witnessed a dramatic start with RJD MLA, Bhai Dinesh, standing at the Assembly entrance, holding a large placards, highlighting the failure of the government in implementation of Rashtriya Swasthya Bima Yojana and MGNREGA scheme in the state.

The fight spilled out of the Assembly hall. Mishra, son of a former chief minister of Bihar, was angered by Siddiqui's remark that he was the son of a “big man”. Mishra retorted outside the Assembly: “Even I know how your son is studying in Philipines”.