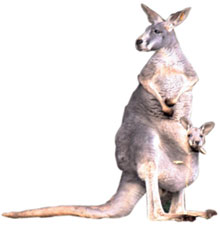 THE mystery of what separated mammals that nurture their young ones for nine months from the marsupials and egg layers has finally been uncovered.

A study has found that many of the genes behind the development of modern mammalian pregnancy are controlled by genetic elements called transposons, long referred to as “junk DNA.” The research team from university of Yale in the US looked at the DNA of uterine cells from the possum, a marsupial that gives birth two weeks after conception and shelters its developing young in a pouch, and compared them with cells from armadillos and humans, which both carry their children to term in a womb. The uterine cells of armadillos and humans shared more than 1,500 genes that possums lacked.

The team also found about 13 per cent of these genes were near to a particular kind of transposon specific to placental mammals. These transposons made uterine cells sensitive to the hormone progesterone, encouraged cells’ development into the placenta and influenced a variety of other changes central to modern placental pregnancy. The paper was published in Nature Genetics on September 25.