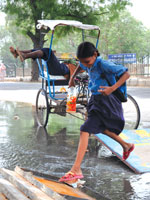 CHILDREN who attain puberty early may have less chances of getting osteoporosis later in life. This information may help Indians take precautionary steps, as one in every three women above 45 years has osteoporosis, a survey conducted by Arthritis Foundation of India states.

Statistics with the International Osteoporosis Foundation shows that one in every eight men and one in every three women in India suffer from osteoporosis. Influenced by genetic and environmental factors, osteoporosis is caused due to decrease in bone density and thinning of the bone tissue.

Those starting a year later had 5 per cent and 2.5 per cent less. Similar findings, but to a smaller magnitude, were reported in healthy boys. Since their bone mass is greater, they get osteoporosis later or not at all. Results of this study were published in Journal of Pediatrics in its January issue this year.

Bones reach their maximum strength and size at about 20 years. The first period of rapid bone growth is from birth to two years. The second period is in the years of puberty, when the speed of building bones in the hip and spine increases by about five times.

Early puberty may reduce chances of osteoporosis, but it is not a healthy sign as it is associated with sedentary lifestyle, consumption of junk food and exposure to chemicals like detergents and pesticides that mimic estrogen. A study published last year in Pediatrics stated that girls with early puberty are more likely to develop breast and uterine cancer later. It also affects their psychological health and is linked to poor self-esteem, eating disorders and depression.

It is “associated with hormonal imbalances and polycryptic uterine. It also affects growth and height which start early,” said Manju Hotchandani, senior consultant of gynaecology and obstetrics at Moolchand Women’s Hospital in Delhi.

Though late puberty leads to decrease in bone mass density, Hotchandani said, it implies late menopause which too, reduces osteoporosis risk. “We have got cases where people have wanted to delay the age of puberty. Injections are administered to suppress hormonal activity, but it can lead to reduction in bone mass.

However, these side-effects are reversible and such people have never reported of developing osteoporosis at a later stage.” Like most diseases, osteoporosis too, afflicts Indians earlier. It occurs between 70 and 80 years in the West, but may strike Indians at 50-60 years.

“Increased osteoporosis cases in India may be on account of deficiency of calcium and Vitamin D, poor nutrition, less exposure to sports, high incidences of diabetes and not reaching the peak bone mass at the age of 25,” said Sushil Sharma, chairperson of Arthiritis Foundation of India.