Out in the cold

It is possible to design buildings that stay cool in summer and warm in winter and save energy. But interest in solar passive architecture is still limited 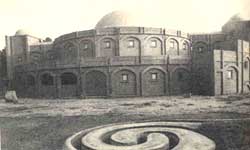 EVEN AS the Central Public Works Department (CPWD) goes ahead with Delhi's first mass residential colony based on solar passive architecture, architects continue to hold reservations about the project. Officials in the department of science and technology (DST), which is bearing half the project's research and development costs of Rs 2.5 lakh, also express their dissatisfaction with it.

The colony at Nehru Nagar is meant for the Central Reserve Police Force (CRPF) and has 135 housing units designed to be cooler in summer and warmer in winter without any artificial conditioning. The buildings have rectangular units instead of the usual square ones, and their activity areas face south. They are painted white to reflect excess sunlight and are aligned in a north-south direction to maximise wind ventilation. Straight sunlight on the walls has been avoided by clustering the buildings and planting trees around them. The windows have been placed to catch maximum sunlight in winter and minimum sunlight in summer. The design will also help keep hot summer winds and cold winter breezes out. All these modifications will mean significant saving of energy.

However, Sanjay Prakash, a leading architect of Delhi, is sceptical about the energy-saving efficiency of the houses. "So many aspects of solar passive architecture have been compromised in this project that it is not possible to estimate the quantum of energy saved," he says. The original consultant's designs had to be changed substantially at the behest of the CPWD.

DST officials feel the CPWD is too amorphous a body to carry out such a project. "So much more can be done in terms of micro-climate planning, horticulture and green cover. Can an agency like CPWD coordinate all this?" they ask.

K R S Krishnan, senior scientific officer of the DST, says that there is nothing new in the project. "It's only a collation of old ideas. Conventional methods and materials like steel and concrete are used. Hence, no additional expertise is required."

T N Gupta, executive director of the Building Materials Technology Promotion Council (BMTPC) and adviser (technology) to the urban development ministry, explains that lacunae exist because nothing is known about efficiency of the existing buildings based on passive architecture. Some of the buildings in the Capital, which are based on this technology are those of the Indira Gandhi National Centre for Arts, Society for Development Alternatives, and one of the hostel blocks in the Indian Institute of Technology (IIT).

It is over a decade since the passive architecture movement began in India, in the early 1980s, when M S Sodha, then head of the Centre for Energy Studies at the IIT, Delhi, got together like-minded architects and technologists to found the Solar Passive Architecture Group (SPAG). But the technology is yet to be taken seriously by the government or architects. Says Gupta, "We have been paying lip service to this concept for a long time. There are very few buildings and projects to demonstrate this idea."

Gupta laments that passive architecture does not have a place in the curricula of engineering and architecture institutions. Neither is it on the agenda of the BMTPC, "where the focus is primarily on saving costs through reduction in the use of cement and steel."