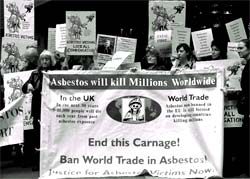 September saw a slew of developments giving renewed impetus to the global movement against asbestos. While a consensus was evolved in three conferences -- organised in different parts of the world -- to prohibit the use of the toxic fibre, Japan went ahead and banned it.

Perhaps the most significant among the three meetings was the one that took place at Ottawa in Canada from September 12-14. It may be noted that the country is the world's second biggest exporter of white asbestos (chrysotile) -- a class one carcinogen. The final resolution stated that by dumping more than 95 per cent of its asbestos in other countries, Canada is "promoting occupational and environmental racism".

Between September 3 and 6 as many as 160 delegates from various countries congregated in Dresden, Germany. They expressed their conviction that the ultimate goal was a worldwide clampdown on asbestos production and use. A similar resolve was made at around the same time by over 500 participants at London in the uk .

However, it was Japan that took concrete action, with its ministry of health, labour and welfare (mhlw) announcing towards the end of September that asbestos would not be manufactured, imported, transferred, provided or used by the country from October 1, 2004.

In what is being considered a major success for the nation's anti-asbestos campaign, the Japanese government has decided to change the Enforcement Ordinance of the Occupational Safety and Health Law to introduce a ban on the fibre. The amendment stipulates that products in which asbestos constitutes more than one per cent weight shall be prohibited. "The curbs have been announced in respect of all asbestos types except crocidolite and amosite, for which they have been in place since 1995," reveals Sugiyo Furuya, secretary general, Japan Occupational Safety and Health Resource Centre, Tokyo.

The goods that fall into the banned list include asbestos cement, circular cylinder, extrusion cement board, decorative home-roofing sheet, fibre-reinforced cement board, ceramic siding, clutch lining, brake pad and lining, and adhesive agents. However, the clause will be waived if any of these are used for research or examination in compliance with all conditions.

Explaining the rationale of the initiative, Japan's mhlw points out that it has zeroed in on particular products since 90 per cent of all asbestos is used for construction materials. The ministry is also likely to modify the Recognition Standards for asbestos-related diseases. Sadly, even as the Japanese authorities are in damage-control mode, the Canadian government continues to mollycoddle its asbestos industry.

Various documents and e-mail communications procured by London-based pressure group International Ban Asbestos Secretariat (ibas) and other organisations provide incontrovertible evidence of the Canadian government's vigorous support to the sector. The Asbestos Institute (ai), a domestic industry body that has been renamed Chrysotile Institute, is a case in point.

"Since the mid-1980s, this Quebec-based association has been working with Canadian and international stakeholders to promote global sales of white asbestos despite mounting evidence that it causes debilitating and fatal diseases," states ibas coordinator Laurie Kazan-Allen. Documents obtained from the authorities in 2002 by researcher Ken Rubin, under the Canadian Access to Information Act, detail the government's links with ai.

According to these papers, the institute received more than us $42 million from the Federal and Quebec governments as well as the asbestos industry to promote "the safe use of chrysotile asbestos...throughout the world between 1984-2001".

Furthermore, the domestic mining industry is heavily subsidised. This despite the fact that most mining no longer returns profits to the provincial and federal governments that subsidise it. In Quebec, where the asbestos extraction activity is concentrated, mining taxes are the lowest in the country and royalties are one-fifth of the subsidies. "At its peak, the province had 10 of the 13 mines in the country," reveals Joan Kuyek of MiningWatch, a Canadian non-governmental organisation (ngo). "Among these, Jeffrey Mine is the largest asbestos open pit in the world. It is currently owned by a company called J M Asbestos," adds Kuyek.

During the late 1990s, the entity received a us $51-million loan out of which 70 per cent was guaranteed by the Quebec government. Kuyek also discloses that both J M Asbestos and lab Chrysotile, the other major private player in the country, export most of their manufactured product to Asia. This issue figured prominently in the recent meet in Ottawa.
Experts at the conference, entitled 'Canadian Asbestos: A Global Concern', were apprehensive about Canada's despatching chrysotile "to countries with hardly any safeguards, where it is used by poorly trained and uninformed workers who have little access to medical care". Critics averred that the Canadian principle of "controlled use" is a hypocritical ploy to profit from the export of a substance which is too hazardous to be used at home.

The conference was organised by a host of ngo s, labour bodies and even political outfits. Prominent among them are the Canadian Union of Public Employees, Occupational Health Clinics for Ontario Workers Inc, Sierra Club of Canada, MiningWatch Canada, New Democratic Party, White Lung Association ( usa ), Society of Occupational and Environmental Health ( usa ), ibas and Global Ban Asbestos Movement. Representatives of countries such as India, France, Japan, South Africa, Peru and the us also presented reports.

Protests staged by pro-chrysotile groups outside the conference venue marred the meet. "On September 12, workers and residents from Thetford (one of Quebec's asbestos communities) were shipped to Ottawa to 'defend' the product," asserts Kazan-Allen. "Outside the conference hall, placard-wielding demonstrators clamoured for saving their jobs. Inside it, representatives from India, Lebanon and Peru described the appalling human tragedy caused by the use of Canadian chrysotile," she recalls.

The conference culminated with the passing of a resolution, seeking a ban on all forms of asbestos. Another positive outcome was the formation of the Canada chapter of the Ban Asbestos Network -- a group of organisations and individuals aiming to spread awareness about the hazards of asbestos use, get the fibre banned and obtain compensation for workers.

After the event, the Ban Asbestos Network of India ( bani ) submitted a petition to Joseph J Comartin, member of Canadian parliament and president of the conference. While appreciating the purposeful nature of the proceedings, bani sought an immediate ban on white asbestos.


The urgency stems from a disconcerting trend wherein a massive public relations campaign has been launched by the chrysotile industry, portraying it as a non-hazardous substance.

Advertisements to this effect were placed in major national dailies in India between October 2002 and September 2003.

The asbestos cement industry claims that the chrysotile which it uses is of a safe type. "Several studies show that chrysotile is not associated with asbestos-related diseases," maintains A K Sethi, executive director, Asbestos Information Centre, a New Delhi-based industry body.

"This is nothing but an attempt to misinform the public," retorts Gopal Krishna, who represented bani at the Canadian conference. "Its objective is to use facts selectively to depict white asbestos as a safe product. Such is the impact generated by the campaign that it has become a model for the international chrysotile industry," laments Krishna.Data presented by Mick Holder of the London Hazards Centre, a research institute, gives the lie to the industry's claim about chrysotile. "In the uk, at least 150,000 people will die of asbestos-related diseases by 2025. Yet the companies peddle their falsehoods to new or expanding markets, notably India and the Asia-Pacific region," he says.


The 14th National uk Hazards Conference in London also took note of the high toll taken by asbestos. It called for a worldwide ban on the fibre and justice for all victims (see also: Common cause). A recommendation was made that an international tribunal be convened to try representatives of those companies and governments which allowed asbestos to endanger lives.

The delegates comprised trade union representatives, safety specialists, campaigners, and kin of those killed and injured at work. The conference focused on relevant issues and mulled over strategies to minimise risk at the workplace. The entire gamut of occupational issues -- stress, recurring injuries, hours of work, exposure to chemicals and impact on the environment -- came up for discussion.

Almost simultaneously, representatives from the eu states, Brazil, Thailand and Japan met in Dresden for the European Conference on Asbestos 2003. They acknowledged the global asbestos legacy, describing it as a health "time-bomb". The 'Dresden Declaration on the Protection of Workers against Asbestos', which was adopted at the end of the meeting, observed: "Eradicating asbestos-related health risks means disseminating the experiences of Europe and adapting these to the needs of other states." Here, too, the need for phasing out the product was reiterated.

In 2000, the eu Senior Labour Inspector's Committee (slic) initiated a working group to investigate how asbestos was dealt with in France, Spain, Sweden and the uk. slic advises the European Commission on enforcement issues relating to health and safety at work. "The resultant report formed the backdrop for the Dresden meet," explains Nigel Bryson, who was a member of the uk team that joined the working group.

Barry Castleman -- environmental consultant, author of the book Asbestos: Medical and Legal Aspects and one of the eu representatives who defended the French ban on chrysotile asbestos before the World Trade Organization -- sums up the safety aspect: "Completely controlled use of asbestos has never existed anywhere in the world, and is not being invented anywhere today."


Although the ill-effects of asbestos have set the alarm bells ringing elsewhere, India is yet to adopt an unambiguous stand on the matter.

A few months back, Union labour minister Sahib Singh Verma assured civil society representatives that he would look into the serious health hazards arising from the use of asbestos. Later, he is reported to have backtracked saying: "There are no studies to suggest that asbestos causes cancer. The environmental organisations campaigning against asbestos are sponsored by vested corporate interests."

Verma's volte-face is all the more unjustifiable in view of the Union minister of state for science and technology, Bachi Singh Rawat's statement to the contrary in parliament. "The Industrial Toxicological Research Centre, Lucknow, and National Institute of Occupational Health, Ahmedabad, have carried out health and environmental monitoring-related studies on asbestos. The efforts have led to working out mechanisms of toxicity of asbestos...highlighting populations that may be occupationally vulnerable," conceded Rawat.

The health problems caused by asbestos (see Down To Earth , 'Sitting ducks', Vol 10, No 22, April 15, 2002, p 34) were recently brought to the notice of Union health minister Sushma Swaraj, too, when a delegation of non-resident Indian doctors from the us briefed her. The doctors warned: "Even a single fibre is capable of causing cancer." But K C Mishra, the then secretary in the Union ministry of environment and forests, seemed unconvinced. "If asbestos causes cancer, then everything causes cancer," he remarked.

Meanwhile, Comartin has made an impassioned plea in a letter addressed to President A P J Abdul Kalam and members of parliament. He contends: "As a fellow parliamentarian and someone with concern for the well-being of your constituents, I would urge you...to enact (a) legislation to ban the...use of asbestos in your country." Are the Indian decision-makers listening?