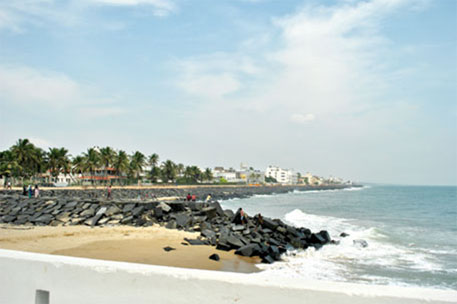 Government agencies in charge of coastal management have raised alarm over fast erosion of India’s coastline.

According to studies by the National Centre for Sustainable Coastal Management (NCSCM) under the Union Ministry of Environment, Forests and Climate Change (MoEF&CC), over 40 per cent of the coast in India is eroding at a much higher rate than previously estimated.

The fast degrading coastline is going to put at risk over 250 million people who are living along coastal areas and over 10 million fisherfolk deriving their livelihood from the coast.

R Ramesh, director of NCSCM, said it’s high time that all agencies and people concerned tackle the problem urgently.
"This level of erosion is a cause for concern, not only because it is higher than previously estimated but also because it calls for the need to address basic issues," said Ramesh at a two-days consultative programme on coastal and marine zone management organised by M S Swaminathan Foundation, Chennai.

M A Atmanand, director of National Institute of Ocean Technology (NIOT), Chennai, called for sustainable solutions along the coastline.

"There is need to maintain a balance between sustainable development and environmental protection," said Atmanand.  There has been constant threat to ecosystem of coastline due to various anthropogenic activities and economic development.

Experts at the meet agreed that there is a need for effective development planning along the coastal zone.

Founder and chairperson of the research foundation, M S Swaminathan, said, "There is need to have management of coastal zone in an organised manner, both in the administrative sense, bringing various departments together, and in also looking at this process in a much more scientific manner."