Over 400 farmers have committed suicide in Telangana since its formation

National Human Rights Commission has sought report from the state 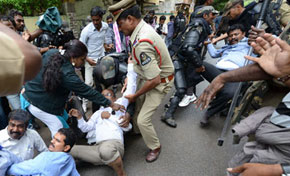 The K Chandrasekhar Rao government in Telangana seems to have failed to deliver on its promise of reforming the crisis-ridden farm sector in the state. Unofficial figures suggest that more than 400 farmers have committed suicide in the past six months.

Telangana, the youngest state in the country, came into existence on June 2 this year. Rao and other leaders of his party, Telangana Rashtra Samithi (TRS), had highlighted farmers' distress as a major cause behind their demand for a separate state. They had also promised to address this concern while campaigning for the state’s first Legislative Assembly elections held in April this year.

"But nothing has changed. Every day, three to four farmers end their lives in different parts of the state due to extreme distress," says Asha Latha, state president of Hyderabad-based Rythu Swarajya Vedika which works for sustainable livelihood for agricultural communities. The state government is turning a blind eye towards the plight of farmers while it blames the anti-farmer policies of the previous Congress governments at the Centre and in undivided Andhra Pradesh, she adds.

Between June 2 and November 26 this year, 430 farmers have killed themselves, according to data compiled by Vedika and other organisations. The Telangana government has asked district collectors to send the list of farmers who have committed suicide in the past six months. "They have recognised only 76 suicides while we have data for 430 suicides with dates, names and villages," says Asha Latha.

Most of Telangana’s agricultural land is still rain-fed. It lacks adequate irrigation facilities in comparison to coastal Andhra Pradesh which has an efficient irrigation network. With a delayed and deficient monsoon, farmers in Telangana have to depend on borewells. But the government doesn’t offer institutional credit for digging borewells and activists say farmers are forced to borrow from private money lenders at exorbitant interest rates.

Farmers’ organisations point out that there are around 2 million functional borewells in Telangana. With Rs 60,000 as the average cost of setting up one borewell, farmers in Telangana have invested Rs 12,000 crore on borewell irrigation. Farmers, however, do not receive sufficient power supply from the state. Of the seven hours of free power promised by the government, farmers receive only two to three hours of electricity to run the wells. Additionally, for every functional borewell, there are two to three failed borewells. These reasons cause farmers to fall into debt traps.

The lack of fresh bank loans in the monsoon crop season has also pushed farmers to despair. Loan waiver promised by major political parties, including the TRS, is the major reason why banks are not granting fresh loans to farmers. (Read “Deadly promise”)

Farmers demand the state should waive institutional as well as private loans taken for cultivation and for digging borewells.

P Srihari Rao, president of Telangana Rythu Rakshana Samithi, an organisation that supports farmers, says 26,000 farmers have committed suicide in Telangana in the last 20 years. In the last 4 to 5 years, around 1,000 farmers ended their lives each year.

"Since January this year, around 900 farmers have taken their lives. The main reason for these suicides is the anti-farmer policy of the Centre as well as the state. Pushing farmers into deep distress and financial crisis and forcing them to commit suicide amounts to murder," says Srihari, who has filed a public interest petition in the Andhra Pradesh High Court seeking help for the families of farmers who have committed suicide. The Centre and the state should come together and make plans to rehabilitate such families, he says. 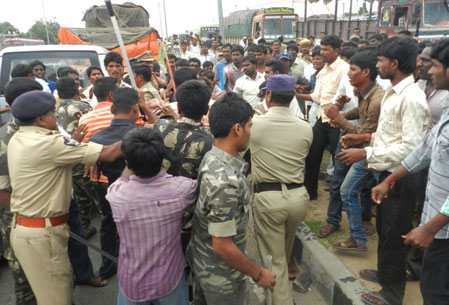 The National Human Rights Commission (NHRC) took suo motu cognizance of media reports on farmers’ suicides in Telangana and issued a notice to the state government on November 25, seeking a report on farmers' suicides within two weeks. The state government has not responded to the notice yet.
Continuing suicides point to a violation of human rights of the farmers, observes the commission. In a press release, the commission says that while the state government had announced a loan waiver for farmers, it stated that the scheme would cover only institutional loans and not those from non-institutional sources, in an order issued on August 13, 2014.

Non-profits, farmers' organisations and political parties have, meanwhile, started campaigning to prevent suicides among farmers. They are organising village- and block-level meetings as part of efforts to build confidence among those who are distressed.

Opposition parties like Congress and Telugu Desam Party, which saw a high number of farmers’ suicides during their rule, have taken up the issue now. Both parties are protesting against the suicides in an effort to bring down the TRS government.