Is Cuddalore's industrial area a Bhopal in the making? Yes, say villagers 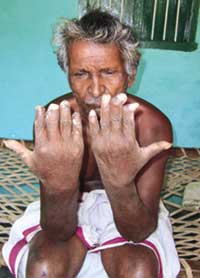 The source of the oppressive odours is a slew of chimneys in Cuddalore's sipcot (State Industries Promotion Corporation of Tamil Nadu) estate on the banks of the Uppanar river. About 20,000 villagers also live in the area.

The estate came up in 1982. Within five years, agriculture in the region became impossible and fishing dwindled. "Once I used to get Rs 200 from fishing, now I get Rs 50," says S Pugahendi of Sangolikuppam village. In 2002, Pioneer Magi released untreated effluent into the river, according to residents of Semmamkuppam village. Fisherfolk who went into the river came back with their skin peeled, they say.

"Everybody here has breathing problems, stomach ulcers, allergies. We have to go to Cuddalore town (10 km away) for a doctor," says S Parashuraman from Semmamkuppam. The village is in a potential Bhopal-like situation -- Pandian Chemicals is located here and it is also the site for the proposed Chemplast pvc factory with an annual capacity of 170,000 tonnes.

This has alarmed the residents of Semmamkuppam, Sonnachavadi and nearby villages because they had rejected the Chemplast proposal at a public hearing in 2002. Chemplast has now managed to obtain a no objection certificate from the Tamil Nadu Pollution Control Board (tnpcb) based on a public hearing conducted in 1999. The proposal is pending before the Union ministry of environment and forests (moef).

Despite the presence of several chemical units, no health study has been carried out in the villages. Between September 2004 and May 2005, sipcot Area Community Monitors -- a group of villagers -- collected air samples, which were sent to us labs. As many as 24 toxic chemicals were found, many at levels 1,000-20,000 times higher than safe limits. After their report, Gas Trouble , was brought out, the Supreme Court Monitoring Committee asked the Central Pollution Control Board to set air quality standards for toxic gases and bring down, by 2004, the levels of pollutants below limits prescribed by the us Environmental Protection Agency.

tnpcb has set up a monitoring station in the sipcot area. But a visit to its lab in Cuddalore town revealed the analysers were not working. "For most parameters, the imported equipment doesn't work," said a technician.

In September, the local member of the legislative assembly, Ela Pugazhendi, said at a public meeting that more polluting factories would not be allowed to come up in Cuddalore. Farmers from villages in Mettur's sipcot industrial area (Salem district), which also hosts a Chemplast factory, spoke of their suffering, injuries and loss of livelihood.

The farmers, along with activists, had planned a padyatra (march) from Mettur to Cuddalore to warn people of the health effects from chemical units. But police denied permission for the march and the Madras High Court directed it be flagged off from Salem. However, even the Salem city police banned the march, in violation of the court order.

In May, 2005, the Indian Peoples Tribunal (ipt), a four member panel headed by retired judge Akbar B Kadri, looked into the alleged environmental and human rights violations committed by major polluting industries in Mettur. It said it found overwhelming evidence of toxic water and emissions impacting health, livelihood and ecology. Almost 50,000 people have been affected.

Crops fail to grow here and goats straying into toxic dumps often die. "We stopped cultivation on our six acres ten years ago," says Sundari Angamuthi, grazing her goats near the red mud dumps in West Gonnur village in upper Mettur. "Our eyes burn and itch. But where can we run from here?" she asks. With agriculture wiped out, the poor have taken to goat tending; some work as contract labour in the factories and others as coolies.

In July 2004, a major chlorine leakage occurred in Chemplast, affecting more than 200 people in West Gonnur. A person working in Chemplast says till about 1996, effluents were discharged into the storm water drain without segregation. Since 2000, some effluents are being treated but chemicals called monomers are not. The heavy hydrocarbons that were earlier dumped are now being incinerated. "The air pollution is still what it used to be," he says.

But Chemplast officers turn a deaf ear to all the charges. "We have been operating chemical plants for 60 years. The ipt report is the imagination of the people," says V Ranganath, chief executive, operations, Chemplast Sanmar, Mettur, denying any pollution outright.

Regarding opening a pvc plant in Cuddalore, Ranganath makes it clear he does not have to get the clearance from the community but the government.


Residents of Semmamkuppam say before the industries came up water was available at 50-70 feet. "Now water is saline at 70 feet. It is light yellow at 70-250 feet and fully yellow upto 500 feet,'' says Ramnathan of Semmamkuppam. The panchayat borewell was sealed as the water had become unpotable. Almost all units have dug borewells despite not being allowed to do so (sipcot provides them water).

Residents of Sangolikuppam village use water from a 1,600 feet deep borewell but complain of skin allergies, utensils changing colour and the water leaving pin holes in their clothes. tnpcb says the waste from the chemical units is collected into a common effluent disposal system and discharged into the sea. However, the local people say that all the effluents actually end up in the river.

Of the 19 units in operation in Cuddalore, licences of Tantech, Tanfac and Tagros have not been renewed for unsatisfactory handling of hazardous wastes.


Activists warn of a potential Bhopal-like situation in Mettur and Cuddalore. "Chemplast is not the upright company it claims to be. They (company officials) have been consistently denying the effect of their plants on health and livelihood of the people -- just like Union Carbide," says Nityanand Jayaram, of Chennai-based Other Media, that has been organising community environment monitoring in Cuddalore. Other Media, and the Federation of Consumer Organisations also working with the people of Cuddalore, point out the complete lack of transparency by the government and industry to make information available. Villagers need special status as a pollution-impacted community, argue the activists.

"We want pollution to be controlled, a hospital, good water, non-polluting small industries that give us permanent jobs, not contract labour," says Parushuraman of Semmamkuppam village. "No further polluting industries should be allowed in sipcot. Clean industries without excessive dependance on groundwater and labour intensive should be invited," reads a petition the villagers in Cuddalore's sipcot industrial area have sent to Union environment minister A Raja. Will the government pay heed?