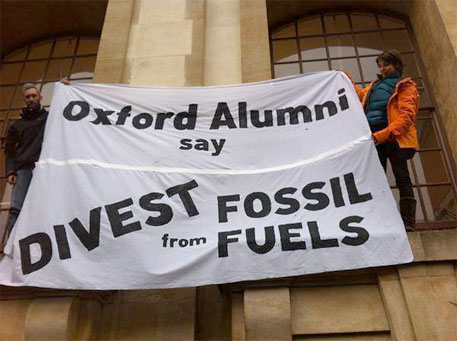 Following a sustained international movement, UK’s Oxford University is considering divestment of its stake in fossil fuels. But on Monday, the university postponed its decision until May, leading to widespread disappointment among students, academics and alumni supporting the “Oxford Fossil Free” campaign. Supporters have been campaigning for over a year and more than 500 alumni have pledged to withhold donations to the university until it divests stake in 200 companies “involved in the exploration, ownership or extraction of fossil fuels”.

Fossil Free is an international movement calling on organisations and institutions to end financial support to the fossil fuel industry. Twenty-one international universities, including the School of Oriental and African Studies (SOAS), University of Glasgow and University of Bedfordshire in the UK, have already taken some form of action to either divest or freeze new investments.

The university was due to make an announcement on Monday. But an Oxford spokesperson told BBC, "Student Union raised an important and multi-faceted matter which requires thorough consideration."

Oxford’s endowment is worth around £ 3.8 billion (US $5.6 billion), making it the second richest university in the UK after Cambridge. Over the last five years, the university has divested its stake in arms manufacturing companies on ethical grounds. The Oxford Fossil Free campaign had made recommendations to the university, asking it to shift to low-carbon alternatives and cut direct investments in coal and tar sands oil.

“I don’t think universities should be training young people to craft a viable civilisation with one hand and bankroll its sabotage with the other,” said Jeremy Leggett, Oxford alumni and renewable energy entrepreneur, in a press release by Fossil Free UK.

The UN Framework Convention on Climate Change (UNFCCC) has backed the fast-growing divestment movement, especially in the interest of getting countries to agree to an ambitious climate agreement in Paris later this year.

“We support divestment as it sends a signal to companies, especially coal companies, that the age of ‘burn what you like, when you like’ cannot continue,” UNFCCC spokesperson Nick Nuttall told The Guardian.

The Guardian newspaper has started an online petition, asking two of the world’s biggest charitable funds—Bill and Melinda Gates Foundation and Wellcome Trust—to divest their stake in fossil fuel companies.

Last week, the London Assembly voted overwhelmingly in favour of fossil fuel divestment and called on the Mayor of London to support divestment. University students from across the UK will observe Frackademics Day today to demand that their professors stop supporting PR exercises for the fracking industry. A report will also be released, questioning links between academicians and fossil fuel companies.

Governing the transition away from fossil fuels: The role of international institutions