Hole in the ozone layer is healing, but ground level ozone is destroying crops that could feed a third of India’s poor 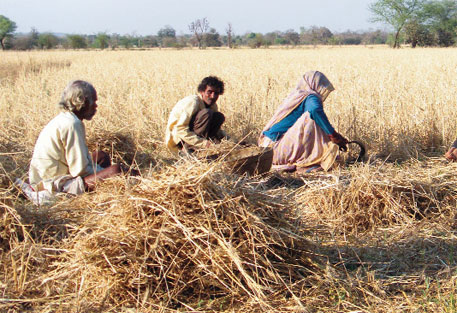 Unlike other air pollutants – ozone is good and bad for us. First, the news about good ozone: the hole in the ozone layer is finally starting to heal, UNEP/WMO reported. This layer is about 20-30 km up in the air, protects life from sun's harmful ultraviolet light by absorbing the radiation which otherwise would potentially damage exposed life forms near the surface.

Now, the news about the bad ozone—this time it comes from India. According a new study published in Geophysical Research Letters, the ground level ozone pollution damaged 6 million tonnes of crops in India. This ground-level ozone is formed in the air by nitrogen oxides and hydrocarbon emitted from vehicles and other sources like cook stoves reacting in the presence of sunlight.

This ozone is close to ground, so as a strong oxidant it is notorious for damaging lungs and vegetation. This ground-level ozone is the main component of smog. Even at relatively low levels, ozone can cause health effects.  People with lung disease, children, older adults, and people who are active outdoors may be particularly sensitive to ozone.

More hazardous than other pollutants

The impact on agricultural yield is assessed for the year 2005. The study’s authors were able to acquire accurate crop production data for 2005 and chose it as a year representative of the effects of ozone damage over the first decade of the 21st century.

The study found that the high concentrations of ozone damaged millions of tonnes of the India’s major crops such as wheat, rice, soybean and cotton crops. This caused losses of more than a billion dollars and destroyed enough food to feed tens of millions of people living below the poverty line.

This study was conducted by scientists from Indian Institute of Tropical Meteorology, Pune, India and US based National Center for Atmospheric Research, Boulder and Scripps Institution of Oceanography and University of California San Diego.

“India could feed 94 million people with the lost wheat and rice crops, about a third of the country’s poor,” said Sachin Ghude, an atmospheric scientist at the Indian Institute of Tropical Meteorology (IITM) in Pune, India, and lead author of the new study. There are about 270 million Indians who live in poverty, according to the study.

Cotton – one of India’s major commercial crops — lost more than 5 per cent of its 3.3 million tonnes (3.6 million U.S. tons) annual output in 2005, costing the country $70 million, according to the research.

How ozone was nailed

Long-term measurements of surface ozone over India – measured on the ground or by aircraft — are not available, making it difficult to get a clear picture of how ozone levels in the country have changed, according to the authors. But satellite-based studies show ozone has increased over the country in the last two decades.

The researchers calculated the amount of total crop damage from ozone pollution by comparing emissions estimates from 2005 with data about how much ozone each of the four crops could withstand. Plants start to exhibit damage when they are exposed to ozone levels that reach 40 parts per billion or above, according to previous research.

A computer model used by researchers calculated ozone levels during crop growing seasons that were more than 40 to 50 parts per billion over most of the country. The team ran the model with different emissions estimates to come up with an average amount of each crop that was lost due to ozone pollution.

Veerabhadran Ramanathan, a professor of climate and atmospheric sciences at Scripps Institution of Oceanography, at the University of California San Diego and a co-author of this study said that “unlike most studies, which look at the effect emissions will have on agriculture decades in the future, the new study examined how ozone emissions are already affecting crops in India”. He added, “The new study could help spur interest in the issue and help policymakers enact new air quality standards or mandate use of new technology to cut emissions.”