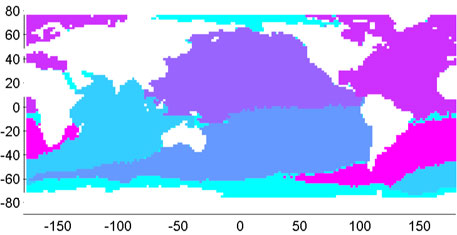 Researchers have developed a mathematical model that can help determine the countries contributing to “The Great Pacific Garbage Patch”, found in the North Pacific Ocean between Hawaii  and California. The garbage patch is a collection of marine debris, mainly consisting of plastic litter, a major hazard for marine animals that feed on them. The garbage patch is a result of garbage discarded in the sea which accumulates at one place due to the formation of oceanic gyers—a large system of rotating oceanic currents, formed by wind movements.

The model, developed by researchers at the University of New South Wales (UNSW), explains how the trash is getting accumulated and from where they originate, says a news report of American Institute of Physics. “In some cases, you can have a country far away from a garbage patch that's unexpectedly contributing directly to the patch," says Gary Froyland, a mathematician at UNSW and the lead researcher of the study published in journal, Chaos: An Interdisciplinary Journal of Nonlinear Science, on September 2.

The researchers have identified the five major ocean garbage patches. They also divided the entire ocean into seven regions whose waters mix very little. They then used a mathematical method that is usually used to partition interconnected systems like the Internet, computer chips and human society to understand the movement of garbage. The analysis showed that parts of the Pacific and Indian oceans are actually most closely coupled to the south Atlantic, while another sliver of the Indian Ocean really belongs in the south Pacific. The researchers say that while attracting regions may be small in size, they can influence global ocean surface dynamics if their basins of attraction are large.

The new model could also help determine the speed with which  garbage leaks from one patch into another. Erik van Sebille, an oceanographer who collaborated with Froyland on the paper, said, "We can use the new model to explore, for example, how quickly trash from Australia ends up in the north Pacific."

“The take-home message from our work is that we have redefined the borders of the ocean basins according to how the water moves," says van Sebille. The geography of the new basins could yield insights into ocean ecology in addition to helping track ocean debris. "Understanding the flow of water in the ocean is crucial to understanding how heat, gases, chemicals (e.g. salt) are transported in the ocean which are important for coupling models of the ocean with models of the atmosphere, CO2 uptake and release by the ocean, the transport of floating material e.g. garbage on the surface, the movement of marine life, especially those that do not swim, the spread of pollution, fuel-efficient paths for shipping," says Froyland. The researchers say their modelling technique could also be used to exaplain how much Canadian and American waters mix in the Great Lakes or how an oil spill might spread in the Gulf of Mexico.