Pak loses $30 million after EU ban on export of seafood 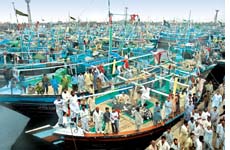 pakistan has suffered a loss of us $30 million since fishing season started on August 1. The marine fisheries department (mfd) in Pakistan imposed a ban on seafood exports to the European Union (eu), Sardar Hanif Khan, chairperson, Pakistan Seafood Industry Exporters Association, said. Khan said that fisherfolk were suffering because there were no buyers and that the processing plants were shut after the ban. Initially, seafood exporters had planned to go to court but had now temporarily dropped the idea since negotiations with the government were going on.

Ever since the fishing season began, around 300,000-400,000 kg of catch per day is going waste and being sold at throwaway prices, especially prawn.Khan said eu had given responsibilities to the fisheries department declaring it a competent authority to ensure implementation of local law, which is based on eu regulations. The rules and regulations are made to make sure that safe seafood is supplied to seafood consumers in the eu countries.

"The processing plants saw the green light during the last three inspections by eu inspectors. How come all of them have failed now?" Khan asks. State Bank of Pakistan data indicates seafood exports at us $160 million until June 2006. The eu countries are the largest buyers of Pakistan seafood with more than 50 per cent share of the total shipments from the country.