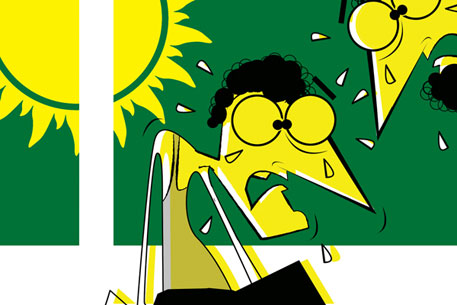 The government of Pakistan has banned air-conditioners in its offices to cope with power shortage. It has also suggested a summer dress code for officials. The ban will be effective from May 15 and continue until the energy situation improves, reads a statement released by the prime minister’s office on May 8.

The dress code recommends light coloured, loose fitting clothes to combat summer heat. Government employees will also be allowed to wear shoes without laces or sandals without socks at work. "The measure reflects the resolve of the government to manage the power crisis by management of demand," the statement said.

However, the energy conservation move of the government has not gone down well with some Pakistan-based environmentalists. “It is a mere eyewash,” said Shafqat Kakakhel, an environmentalist based in Islamabad. I doubt that this move would be implemented properly. Abbasi, on the other hand, said better ideas are needed to combat heat—by focusing on green architecture, for example. “Also, the decision has been taken by the interim government. We are still to see if the new government will support this regime,” added Abbasi.

Meanwhile, demand for air-conditioners in India is growing at over 30 per cent annually. According to a study by the Associated Chambers of Commerce and Industry of India, the room AC market in India was estimated at 4.2 million units and valued at Rs 7,200 crore in 2011.