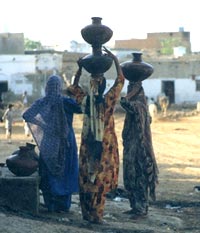 a unique people's movement is gathering momentum in Pakistan. Local residents and politicians of a small town in central Punjab in Pakistan are resisting tooth and nail an attempt to siphon off their water resources to a bigger urban centre.

The plan to install tubewells in the villages around Chiniot, which lies on the banks of Chenab river, has been formulated by the provincial government. These tubewells will provide 'sweet water' to the residents of Faisalabad -- the country's textile centre.

Under the project, funded by Japan International Cooperation Agency (jica) and implemented by Pakistan's Water and Sanitation Agency (wasa), 18 new tubewells will be installed in three villages near Chiniot. "The project will boost the daily supply of water to Faisalabad by 40 cusecs, making up for the acute water shortage in the city," reveals a wasa spokesperson. The new tubewells are in addition to 25 others, which were installed in Chiniot in the late 1980s to provide 92 cusecs of water to Faisalabad every day.

This constant drain of water from Chiniot has had a serious impact on the local people. "Around 15 years ago, people drew groundwater from a depth of 18 feet, but the water table has now plummeted to 50 feet in most parts of the region," points out Zulfiqar Ali Shah, mayor of Chiniot. He adds: "We cannot justify this project, particularly when the people of the region are themselves grappling with water scarcity."

Local leaders' talks with the chief secretary of Punjab and wasa officials have ended in a deadlock. While the Chiniot Tehsil Council disallowed the execution of the project, the Punjab government and wasa officials completely ignored its opinion as they signed the pact in August 2002. "This is just one of the examples of top-down planning that continues to be practised amid much hullabaloo of decentralisation of power. The people of Chiniot should have been involved," avers Syed Hassan Murtaza, who represents the area in the Punjab assembly.

"We are concerned about the Chiniot project. Although it falls under the jurisdiction of the Punjab government, we will look into it and find out if an eia has been conducted for the project," says Asif Shujja Khan, the director general of epa.

It remains to be seen whether the people's struggle and epa's intervention bear fruit, especially when the project is being promoted by the provincial government itself and involves a Japanese entity as well.