Panna to get two tigresses 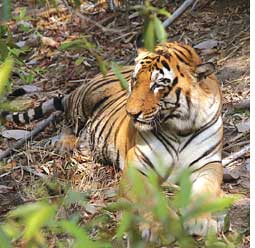 But will that save the tiger reserve from heading the Sariska way?

TWO tigresses from Bandhavgarh Tiger Reserve will be introduced in Panna Tiger Reserve in Madhya Pradesh by February 2009. "We have sighted fewer tigresses in the last couple of years. Bringing in two would help us restore the sex ratio in the reserve," said L K Choudhary, field director of Panna Tiger Reserve. Skewed sex ratio of tigers often results in inbreeding that affects the future tiger population in a reserve.

The National Tiger Conservation Authority, under the environment and forests ministry, had recommended the plan. On December 1, the authority wrote to the chief wildlife warden of Madhya Pradesh that the tiger population in Panna was "alarmingly low" and required "immediate intervention".

The tigresses will be airlifted from Bandhavgarh and released in Panna under the supervision of the Wildlife Institute of India, Dehradun.They will be fitted with radio collars, so that wildlife officials can monitor their movement.

The conservation authority recommended a similar plan for Rajasthan's Sariska Tiger Reserve in June 2008 after it lost all its tigers to poaching (see box Making of an inviolate reserve).

Some conservationists say the reintroduction plan for Panna has come too late; reports have been highlighting a low tiger population in the reserve for the past four years. In 2005 conservation biologist Raghu Chundawat, who studied tigers in Panna for a decade, said 23 tigers appeared to be missing from Panna. He was contesting the 2002 census that said Panna had 31 tigers. "The last female was seen over two years ago. But the government refused to listen. Even now they (forest officials) claim there are about 30 tigers in the reserve," said Chundawat. In the same year, following Chundawat's report, the Supreme Court-appointed Central Empowered Committee visited Panna and reported that the tiger reserve could "turn into another Sariska".

Choudhary refuted such reports, saying the Wildlife Institute of India census 2008 estimated 24 tigers in Panna. The census report, however, admitted that the count seemed overestimated. 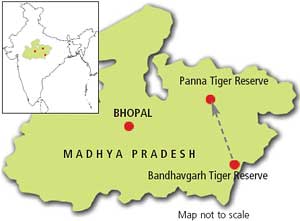 The tiger conservation authority linked the decline to disturbance in the forest due to the presence of dacoits and absence of buffer zone. This hampered the breeding process, said Rajesh Gopal, member secretary of the authority. Forest guards cannot patrol properly for fear of dacoits. The authority proposed introducing tigresses after the leader of the dacoits operating in the area was killed recently.

Chundawat contended that the tigers were lost even before the dacoits came into picture in 2006.

The tiger conservation authority, however, is hopeful. Panna Tiger Reserve was notified as critical tiger habitat in December 2007. Four villages inside the forest have since been relocated and four others are in the process of relocation. "This will make the reserve inviolate," said Gopal.