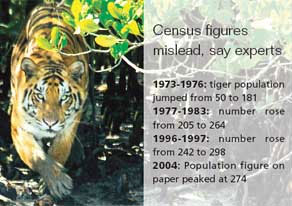 West bengal’s forest department officials claim the mangrove forests of the Sunderbans has about 250 royal Bengal tigers. But analysis by the Indian Statistical Institute and a count carried out by the government-run Wildlife Institute Of India (wii) indicate the state forest department figures are inflated.

The two institutes have separately estimated the number of tigers in the wildlife reserve to be between 65 and 85.

The figure came to light when the Union minister of state for environment, Jairam Ramesh, was visiting the Sunderbans in mid-January.


He asked the state forest officials for a complete and credible count of tigers in the Sunderbans by November. “While the wii and some senior officials in my department feel the tiger population in the Sunderbans is about 65, the West Bengal officials claimed the number is 200-plus,” Ramesh said.

The state principal chief conservator of forest, Atanu Raha, who accompanied the minister along with senior forest officials, initially claimed there were about 250 tigers in the Sunderbans. But experts accompanying the minister expressed doubts over this figure saying the prey-base in the forest is not enough to sustain 250 tigers. Field director of the Sunderbans Pradip Vyas questioned the wii methodology. “If 250 is not the actual figure, how can we say 65 is the actual figure,” he said, pointing out that previous attempts to count the tigers with radio collars had failed. When pressed over the issue, Vyas conceded that no one knows for sure the number of tigers in the Sunderbans. His admission fuelled more speculation on the previous censuses that show the tiger population in the Sunderbans has been rising steadily.

“The state census figures are rubbish; some of the figures showing increase in number of tigers defy population dynamics for even those tigers living in the best ecological conditions,” said P K Sen, the former director of Project Tiger who is now a member of India’s tiger task force. “The real number may be about 65,” said Sen.

Biswajit Roy of non-profit Nature Environment and Wildlife Society said his experience in the Sunderbans show the prey base is low and not enough to cater to 250 tigers. His opinion gains credence from the fact that forest department officials recently released 64 deer in the forests in Dobanki due to low prey base.

“I am not sure of the numbers; but keeping in mind the ecology and other factors, the 250 plus figure seems to be in paper. The fact remains that Sunderbans never had that kind of number despite the place being a safe haven for tigers due to its terrain and sheer inaccessibility,” said wildlife activist Bittu Sehgal.