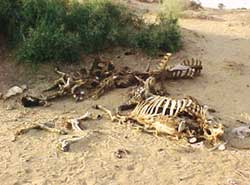 The province of Balochistan and parts of Sindh province of Pakistan are in the grip of a drought. This is likely to affect cotton, rice and sugarcane crops, the mainstay of the country's agrarian economy.

Experts say lack of rain is not the main reason for water shortage in Pakistan. "Water availability is low primarily because of water theft and its inefficient use in farms. Water loss during distribution and drought are only secondary reasons," says Hussaini Jagirdar, a development economist and an agricultural expert. Faulty management, theft and seepage need to be urgently addressed, he adds.

While the western part of Balochistan suffers from severe drought, other parts of the province together with Sindh, face moderate drought. "We are in the first category of a meteorological drought with last year's winter rainfall being 40 per cent below normal in the two provinces, which receive monsoons during winters," says Qamar-uz-Zaman Choudhry, director-general of the meteorological department. A meteorological drought is declared when the rains are less than normal.

Another type of drought -- hydrological drought -- when water level in rivers and dams is low, also prevails in the country. Punjab and North West Frontier Province have been particularly hit. "Water level in smaller urban dams like the Simli, Rawal and Khanpur in the Punjab province are at a critical level," says Choudhry.

But he is not despondent: "Though a moderate drought condition has developed in Balochistan, it is not alarming." Choudhry hopes the onset of monsoons and good micro water management by the government will increase the water level in most dams.

Pakistan has been experiencing a dry cycle since 1998. Usually, a dry cycle lasts around four years and drastically lowers the water table. It is followed by a short wet season. But Pakistan's current dry spell has been longer than the usual. Last year, there was no rain in Balochistan and Sindh.

Will the dry conditions severely affect the crops? "It's too early to predict the drought's impact on kharif crops. A dry spell would be a blessing for cotton crops but rice fields might suffer. We will have to watch the precipitation pattern. There are signs of early monsoon in the Bay of Bengal that might bring in some rain," says Jagirdar.

Qamar-uz-Zaman Shah, president, Sindh Agricultural Chamber and a leading farmer, is less optimistic. He says that farmers could not sow cotton on time this year because of water shortage. "Late sowing will adversely impact the cotton crop and also affect the country's economy," he says. The textile sector's share in Pakistan's exports is almost 60 per cent, and the sector provides employment to around 25 per cent of the country's workforce.

The drought's effect on sugarcane is also likely to be severe. Pakistan will have to import about 1.2 million tonnes of sugar from November 2006 to April 2007, according to a report released recently by the us Department of Agriculture. While last year it had imported only 0.15 million tonnes of sugar, two years back it had excess stock.


At the root of the current situation is mismanagement, say experts. Shah, for example drew attention to recent cases of water theft from the Indus river -- between Tunsa barrage in Punjab and Guddu barrage in Sindh. The pilferage caused the water flow to drop from 20,000 cusecs to 4,000 cusecs, according to the Indus River System Authority (isra) that oversees irrigation water distribution. isra found that influential feudal lords were lifting water.

Meanwhile, people in Sindh, North West Frontier Province and Balochistan feel the government is not managing the existing dams well, and are opposing plans to build new ones. The Indus will turn into a dead river, they fear. Silting is a major problem in several dams.

For instance, the capacity of the reservoir of Tarbela, Pakistan's largest earth-filled dam, has been reduced by almost a third due to silting. But instead of opting for efficient water management and promoting crops that require less water, the government has announced us $40 billion plans for more dams without any idea where all the money for the proposed dams will come from.