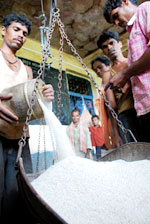 The much awaited report of the parliamentary standing committee on the National Food Security Bill was submitted to the Lok Sabha speaker on January 17. This paves the way for the government to push for its enactment in the upcoming budget session in February.

Contrary to popular expectations, the report has not changed the scope and amount of subsidised foodgrain entitlement in the bill. Rather, it has shifted the responsibility of covering more population under the proposed law to states.

Extending responsibility to states, the committee says, “The state governments may be given the flexibility to extend the coverage beyond the numbers prescribed under the proposed bill out of their own resources so as to cover more population, but not less population as envisaged in the proposed bill.”

The report stresses on evolving a mechanism of dealing with problems relating to food grains supply, its holding and upholding charges. The committee further recommends that the department of food and public distribution, the Food Corporation of India and the ministry of Railways may evolve a mechanism to deal with these problems.

The committee strongly recommends complete modernization and time-bound reforms in PDS. The committee has suggested computerisation of PDS operations and  transparent recording of transactions at all levels by installing CCTV cameras.

The committee has also recommended Centre's sharing of one time infrastructure cost of the state as per its financial performance. It has suggested division of states into three categories—A,B, and C—as per their financial health. Category A states are those that are considered financially well off and they would not get any financial assistance. The Union government may provide financial assistance to the extent of 50 per cent to B category states and 75 per cent to C category states. This assistance would be for one time capital expenditure to be incurred on creation of infrastructure, constitution of state food commission and creation of storage facilities up to the block level.

The state exchequer would incur Rs 1,12,205 crore as food subsidy in 20012-13 if this bill gets implemented in the current form. The committee suggests the department to consult finance commission with regard to additional expenditure required to be borne by the states and Union territories for the implementation of the Food Security Bill, 2011.