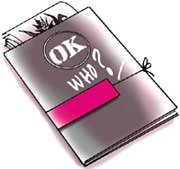 who assessed gm foods to establish a knowledge base for evaluating their application. It looked at the current use, research, risk assessment in relation to food safety, nutrition, environmental health, food security, intellectual property rights, national capacity for risk assessment, and social and ethical issues regarding introduction of gm crops. "We can hope to gain the health and nutritional improvements of gm foods when we can help countries to research how they can control and exploit the introduction of gm products for the benefit of their own people," says Jorgen Schlundt, the director of who's food safety department.

who's assessment is one of the many recent reports brought out by international organisations suggesting gm food is safe. For example, in a report last year, United Nations' Food and Agriculture Organization had unequivocally endorsed gm technology. The who report clears doubts about currently available gm crops of maize, soybeans, rapeseed, cotton, papaya, potato, rice, squash, sugar beet and tomato. The report should help the industry, which is having a tough time popularising gm products despite huge investments in research and advertising. As some of the genes used to manufacture gm foods have not been a part of the food chain (for example, genes from a plant pathogen, Agrobacterium, found in soil, are used to modifiy crops such as soybean and potato), there is concern amongst health, environment and agriculture experts.

The report fails to provide any added information on gm food other than saying it is good. Some experts allege who has reached this conclusion only because its experts looked very selectively at the available information. "The presence of such misleading statements is not surprising, since the majority of the members of the background group of experts come from regulatory agencies or have links to the biotech industry," says Jeffrey Smith, the us -based author of Seeds of Deception, which describes the politics behind the introduction of gm crops. "The who report listed several ways in which gm crops may have negative health impacts and described several areas where assessment criteria was needed in order to prevent dangerous gm foods from getting onto the market. For some inexplicable reason, however, the report overlooks these entirely by declaring that the current marketed gm foods are safe," he says.

The assessment does seem biased because it overlooks some negative research. The most glaring omission seems to be of the studies carried out by Arpad Pusztai, a biologist from Rowett Research Institute, Scotland. Pusztai had found impaired growth and reduced immune response among rats fed gm potatoes. Similarly, the who experts have also not considered a 2004 study on horizontal gene transfer showing genes from gm soy can be transferred into the gut bacteria of humans. These genes include promoters that might unintentionally switch on other genes, leading to overproduction of allergens, toxins and carcinogens.

Surprisingly, even the industry does not seem too happy with the who report. It feels that who has tried to offer sops to every stakeholder group in the world just to be politically correct. " who's report calls for socio-economic, ethical and cultural assessment of the acceptance of gm food to be included in the safety review, which is impractical, and for which most regulatory authorities do not have the expertise. If this is done on a case-by-case basis, it will unduly delay implementation of gm foods in most developing countries," says S Shantharam, president, Biologistics International, a research consultancy in Maryland, usa. "This will make it harder for resource-poor farmers to benefit from such technologies," adds C S Prakash, director, Center for Plant Biotechnology Research, Tuskegee University, usa.

For India, the report seems to have come at a crucial period. According to Suman Sahai of Gene Campaign, a Delhi-based non-governmental organisation, the report is a dangerous instrument in the hands of the industry especially at a time when the biotech policy is being discussed. "They now have an unbalanced and substandard document endorsed by an international organisation to put pressure on the government," she said.