Inflation making food out of reach for many, say demonstrators 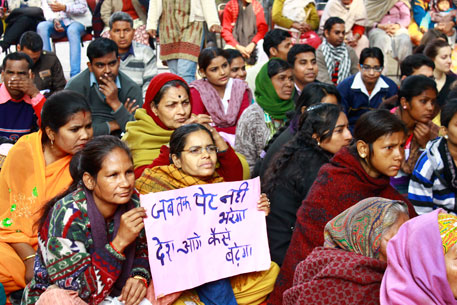 Hundreds of Delhi residents under the aegis of Khadya Nyaya Abhiyaan (KHANA) gathered at Jantar Mantar on Wednesday, demanding food justice so that the ‘antim jan’ (the last person) in Delhi does not go hungry. The event was named Khana Katha (food story).

The participants, who were from a cross section of society, shared their views on the growing inflation and how food was getting beyond the reach of the common man. The residents complained that the government’s growing belief that the public distribution system is unnecessary was wrong. Many of them were still depending on monthly ration from fair price shops and said that they had gathered to show Delhi government how the state’s hunger is increasing and food becoming unaffordable.

Durba, a campaigner with KHANA, said that the participants included resettled migrants, traders, service men and women, daily-wage earners, working women, small and marginal farmers, homeless people, development workers and students. “While we all come from different walks of life there is a common belief we have that safe and nutritious food must be always accessible to everyone.” She added that it was the government’s responsibility to ensure “food for all”.

KHANA is a public campaign for universal food and nutritional justice. It involves and builds agencies of the people who are most affected by inflation, poor quality of PDS foodgrains and non-accountability on part of the government. Through the campaign activities, KHANA has reached out to over 40,000 citizens of among different communities in Delhi and has successfully engaged them to talk about how they are experiencing, reacting to and being impacted by inflation, an inadequately accountable government and a poor public distribution system.

Jaya Iyer, a theatre personality and a food activist, said there was a need to make the invisible face of Delhi’s hunger visible. “In the past four months, we have been going to various communities to understand their experiences of access and quality of food and realized that despite popular belief, many are severely hungry in this city because of systemic causes such as lack of ration cards and inflation. So on this day we want to remember the ‘antim jan’ that Gandhi worked for and make the call ‘Food justice unto the last',” said Iyer.

The protesters demanded that Delhi government should project real inflation figures as these would reflect ground realities vis-à-vis food prices along with revival of universal public distribution system to ensure that there is only one kind of ration card with no discrimination between above poverty line and below poverty line beneficiaries. They opposed the government’s Annasree scheme and cash transfer in lieu of food stating that every person being entitled under PDS should get nutritious foodgrains, including cereals, pulses and cooking oil.