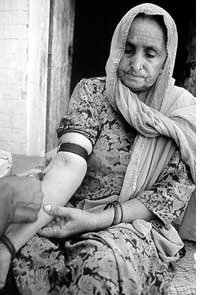 faced with increasing scientific evidence of pesticides-induced health disorders, the Punjab government has decided to begin a cancer registry programme. Adding to numerous health studies, two recent reports have revealed the fast-deteriorating public health in the state (See 'Toxic nexus', Down To Earth, December 31, 2007). A report by Punjabi University, Patiala, revealed the high rate of dna damage among farmers due to pesticide use. Another government-funded study brings to light widespread contamination of drinking water with pesticides and heavy metals, causing cancer and other diseases. dna damage also enhances the risk of cancer and gene mutation.

The Punjabi University study, titled "Assessment of genetic damage in workers occupationally exposed to pesticides in various districts of Punjab", was conducted by Raminderjeet Kaur of the Department of Human Biology. The study found significant dna damage in 36 per cent of farmers' blood samples and the worst affected were the cotton, paddy and wheat growers. "Pesticides cause damage to the dna and eventually its fragmentation. This increases the chances of cancer and chromosome mutation," said Satbir Kaur, Raminderjeet Kaur's guide for the study.

Between 2003 and 2006, blood samples of farmers were collected and tested twice a year. The first 210 samples were collected soon after a day of intensive spraying. The second tests were conducted on 60 farmers from the first group after six months to determine the frequency of dna repair. While dna fragmentation was found in 36 per cent of the fresh samples, 15 per cent follow-up cases showed fragmentation. Smoking, drinking and age were not found to be co-related to the extent of dna damage.

Cotton farmers were the worst affected because the maximum amount of pesticide is sprayed in cotton fields. "Banned pesticides are also in use," Satbir Kaur said, adding that the government should begin assessing farmers' exposure to chemicals.

The industry response was typical: shift the blame on someone else. "It is the failure of the government's extension services and retailers in training farmers," said Rajen Sundaresan, general manager, communications, Agrochemical Policy Group, an industry body.

The other study surveyed areas of maximum pesticide use in the state and reported high and rising incidence of cancer and other illnesses. The research found that heavy use of pesticides and fertilizers had contaminated the drinking water with pesticides and heavy metals. It revealed that drinking water was one of the major causes of death in Punjab. The study was conducted by a committee headed by J S Bajaj, vice-chairperson of the Punjab State Planning Board.

The survey revealed that contaminated water had led to a rise in the cases of cancer, asthma, joint pain, premature greying of hair, skin diseases and, to an extent, mental impairment. It was conducted in 17 villages in south-west Punjab's Bathinda, Faridkot, Mansa and Muktsar districts that come under the Malwa region, the cotton-growing belt known for high pesticide use.

The survey found that pesticides seeped into the groundwater, which the villagers consumed through hand pumps and canals. Bathinda and Muktsar are the worst affected. In the past 10 years, Sheikhpura, Jajjal, Giana, Malkana and Mahinangal villages in Bathinda registered 91 deaths due to cancer, while 10 more cancer cases have been reported this year. A 2005 study by the Centre for Science and Environment, a public interest group, had found high levels of pesticides in farmers' blood samples from these villages (See 'Residue of a revolution', Down To Earth, June 15, 2005). Jhanduke and Balton in Bathinda registered 17 cancer deaths in the past year alone.

The pesticide industry, however, refuses to acknowledge the link between pesticides and diseases. "The study does not infer that pesticides cause cancer," Sudanresan said.

Taking cognisance of these and earlier studies, the state government has decided to begin its cancer registry programme with the Indian Council of Medical Research. According to sources in the state Health Department, the Post Graduate Institute of Medical Education and Research, Chandigarh, will be the nodal agency. The programme is likely to begin in July in Muktsar, which has a high prevalence of cancer.