Anumita Roychowdhury, head of air pollution control unit of Delhi non-profit Centre for Science and Environment, explains the health, budgetary and other  implications of the differential price policy pursued by the government vis a vis petrol and diesel 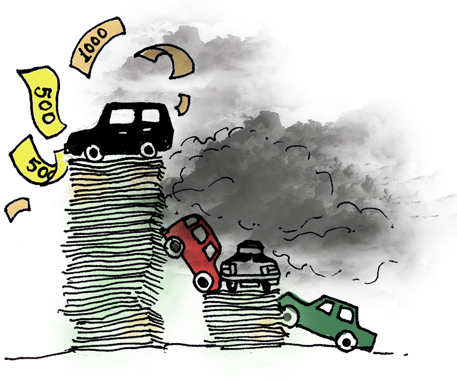 The petrol price hike announced on May 23 has further widened the gap between petrol and diesel prices. What will be its effect?

The repeated petrol price hikes are fanning the lure for diesel cars which give a cheaper run for money. The government is grossly ignoring the severe public health impacts of increasing diesel emissions in Indian cities, the energy impacts of the steady shift towards bigger diesel cars and SUVs and the crippling revenue losses on account of subsidy to rich car owners.

It is shocking that diesel cars account close to half of the new car sales. What's more worrying is that in the more popular compact car segment, diesel cars already account for 70-75 per cent of all car sales. Cheap diesel is not only worsening public health risk but also inciting more motorisation and congestion.  Cars have already become the second biggest user of diesel and beneficiaries of the official fuel tax policy. Cars use up 15 per cent of the total diesel in the country compared to 12 per cent by buses and agriculture each, 10 per cent by industry, and 6 per cent by the railways.

Cheap diesel is also a threat to energy security. Cheap diesel is pushing the market towards bigger cars and SUVs that guzzle more fuel, and undermines fuel efficiency advantages of small cars. High petrol prices has kept the bulk of the petrol car sales—as much as 87 per cent—below the 1,200 cc engine range. More than 40 per cent of diesel cars are above the 1,500 cc range. Last year, the SUV segment registered a 41 per cent growth rate. This trend is set to explode.

Who benefits from the differential tax policy of government

It is ironic that while fuel tax differential has been officially justified in the name of agriculture and freight, it is the rich car owners who have benefited more from it. Cars have already become the second biggest users of diesel and beneficiaries of the official fuel tax policy. The government must act fast to slap additional duty on diesel cars to neutralise the effect of low tax diesel. But the government has yet to muster courage to tax diesel and diesel cars.

Will increase in diesel cars lead to increased spending on healthcare?

It is our health which is at stake in this gamble. The government refuses to acknowledge the health risk of diesel sold in India. The World Health Organization (WHO), the International Agency for Cancer Research, the California Air Resources Board and the US Environmental Protection Agency have branded diesel particulates as toxic air contaminants and human carcinogens. These cause lung cancer and even kill unborn foetuses.

The cancer potential of diesel particulates is several times higher than that of some of the worst known air toxins. It can cause 300 excess cancer cases per million people exposed to one microgramme per cubic metre concentration over a 70 year period. This number is 170 for one of the worst known toxins—1,3-Butadiene. Diesel cars also have the legal licence to emit more particulate matter and nitrogen oxides that are choking our cities. Other governments consider these risks before taking a decision. But our officialdom is content to trade cancer for profits of the auto industry.

Why do we need to deregulate diesel prices?

It is important that diesel prices reflect international prices. Decontrolling only petrol is shifting the market towards bigger diesel cars and SUVs. At the same time there is dearth of funds to clean up the fuel. With generous dispensing of cheap diesel to rich car owners, the government has turned the market around.  Media is abuzz with the Petroleum Planning and Analysis Cell’s report. It says the diesel consumption growth rate at 6.4 per cent has outstripped that of petrol at 4.5 per cent. Petrol price hikes have made the fuel price gap wider. The government’s generosity abounds as it willingly shoulders mammoth revenue losses to support this luxury consumption. While it earns Rs 14.35 a litre from excise on a litre of petrol, it settles for a mere Rs 4.60 per litre from diesel. It also disallows full recovery of the market prices of diesel and graciously shares this cost burden with the oil marketing companies.

If freeing diesel prices is politically difficult, increase the tax on diesel cars to fully neutralise the incentives that diesel cars get from the low-taxed diesel fuel. Or else ban use of diesel in cars. Many countries have already taken such steps. Brazil actively discourages diesel cars because of the policy to keep taxes lower on diesel. Denmark taxes diesel cars higher to offset cheaper diesel prices. In China, taxes do not differentiate between petrol and diesel. Sri Lanka has reduced diesel car sales dramatically by slapping very high duties—close to 300 per cent.

Why is a rational fuel efficiency standards important and how it is related to price rise?

After years of dilly-dallying, the Bureau of Energy Efficiency (BEE) released a draft proposal of fuel efficiency standards last year for public consultation.  The draft proposes fuel efficiency of 5.73 litre per 100 km by 2015, and to 5.14 litre per 100 km by 2020 for cars. This means less than one per cent reduction per year until 2015 and 2.2 per cent reduction thereafter until 2020. The draft drew sharp criticism from environmentalists. After that it has been reported that BEE has revised the norms to 5.5 litre per 100 km in 2015 and 4.8 litre per km in 2020. But it has not been officially released.

However, this too is a marginal revision. India should aim to bring it fuel efficiency norms close to Europe's target, which is 4.1 litre per 100 km by 2020.

As a result, some car makers will get away by nothing the first few years. Estimates from available data show that some of the car majors in India, like Tata Motors and Hyundai, are well within the proposed standard line and will not have to do anything for five years. Over 10 years, they will have to achieve approximately only 1 per cent improvement. Maruti Udyog Ltd will have to improve by about 2 per cent over 10 years. The revised proposals are awaited.

Delay in announcing and implementing the fuel economy standards for 2015 and 2010 can seriously jeopardise energy security and climate mitigation plans, especially given the unprecedented growth in car sales. Crude oil prices are peaking again and this can hurt India tremendously as it imports nearly 80 per cent of its crude oil needs. We need to take steps to save fuels by promoting public transport and fuel-efficient vehicles. It is extremely ironical that when the energy crisis has assumed such a serious proportion, we are delaying implementation of fuel economy standards.

We need a periodic review of the standards and seek meaningful enforcement of regulations through independent monitoring and public disclosure laws so that the standard’s compliance or non-compliance is publicly verifiable with strong penalties.