Experts in the West say Phailin is category 5 tropical cyclone, and may prove to be more devastating than even Hurricane Katrina 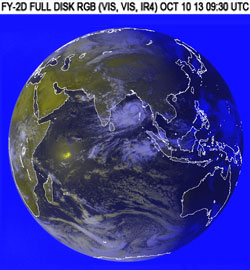 Both London-based Tropical Storm and the US Navy's Joint Typhoon Warning Centre have forecast winds reaching up to 315 km per hour on landfall, which would make Phailin a category 5 storm—the most powerful. India Meteorological Department has, however, were daying till Friday that the cyclone would not be so severe. Phailin originated over east-central Bay of Bengal and has since intensified while moving north-westwards, 800 km southeast of Paradip (Orissa) and 870 km east-southeast of Visakhapatnam (Andhra Pradesh).

Eyewall replacement cycles, also called concentric eyewall cycles, naturally occur in intense tropical cyclones, generally with winds greater than 185 kmph (115 mph), or major hurricanes (category 3 or above). When tropical cyclones reach this intensity, and the eyewall contracts or is already sufficiently small, some of the outer rain bands may strengthen and organize into a ring of thunderstorms—an outer eyewall—that slowly moves inward and robs the inner eyewall of its needed moisture and angular momentum. Since the strongest winds are in a cyclone's eyewall, the tropical cyclone usually weakens during this phase, as the inner wall is "choked" by the outer wall. Eventually the outer eyewall replaces the inner one completely, and the storm may re-intensify.

Meteorologist Jeff Masters's blog reads that in case of Phailin, the eyewall collapsed, and a new, larger-diameter eyewall formed from an outer spiral band. This process typically weakens the top winds of a tropical cyclone by 5-15 mph, and satellite estimates of Phailin's central pressure increased from 910 mb to 934 mb during the eyewall replacement cycle, on Friday. However, satellite images show that Phailin has completed its eyewall replacement cycle and is now re-intensifying, with the cloud tops of the very intense thunderstorms in the eyewall expanding and cooling, as updrafts in the eyewall grow stronger and push the clouds higher into the atmosphere.

The latest satellite estimate of Phailin's central pressure had dropped to 920 mb as on 13 UTC (9 am) on Friday. Radar out of Visakhatpanamin Andhra Pradesh shows that heavy rains from the outer bands of Phailin are already affecting the coast, and these bands were bringing rainfall rates of over an inch per hour, as estimated by microwave data from 10:55 UTC Friday. Phailin is over ocean waters that have warmed since Thursday, and are now 29 - 30°C. These warm waters extend to a lesser depth than before, and ocean heat content has dropped to a moderate 20 - 40 kJ/cm^2. Wind shear remains low, 5 - 10 knots.

In simpler terms, Phailin is now even bigger than Hurricane Katrina and half of the size of the Indian Sub-continent.