200 people in Ganjam get diarrhoea after drinking contaminated water 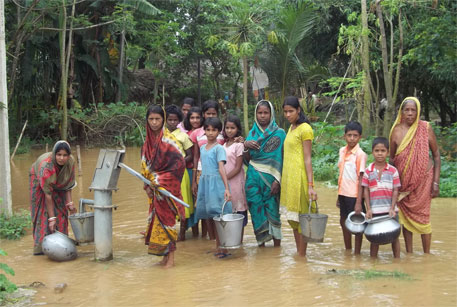 People may have survived the cyclone, but their lives are in danger because of insanitary conditions and lack of proper food and clean drinking water in the camps where they have taken shelter as well as in the villages where many are marooned by flood water. Water is yet to recede in Jajpur, Kendrapada, Balasore, Ganjam, Puri, Bhadrak, and Mayurbhanj districts; the stagnant water all around has become breeding ground for mosquitoes and insects.

"Most displaced people live in makeshift encampments with no sanitation or access to safe water," says Biraja Pati, a social activist in Kendrapada.

The crisis is most severe in Bari block of Jajpur district, Chikiti block in Ganjam district, and Aul and Rajkanika blocks in Kendrapada district.

Around 200 residents, including 45 children, of Chikarpangi village under Chikiti block of Ganjam district are suffering from diarrhoea after consuming contaminated water.

Vast expanses of water surround villages that now look like islands. Most are still inhabited. The biggest problem of the inhabitants is drinking water.

The only way out from the marooned Bari area is on one of the rescue boats that shuttle between the village and the main road.

Basanti Jena, 75, of Boitalupatana village in Bari block, sits in a crowded tent she shares with 20 relatives. They lost everything—house, crops and, most precious of all, their livestock. "Nobody deserves what has happened to us," she says.

The situation is desperate. Children are starving. Bari is facing the worst flood since 1982, and it has washed away much of its food supply.

"Around 500,000 people have no access to clean drinking water, and risk  diarrhoea and other water-borne diseases. Lack of clean water leads to poor sanitation, and this is a major concern which leads to heightened risk of disease. Waste is building up," says Debendra Jena of Bari. 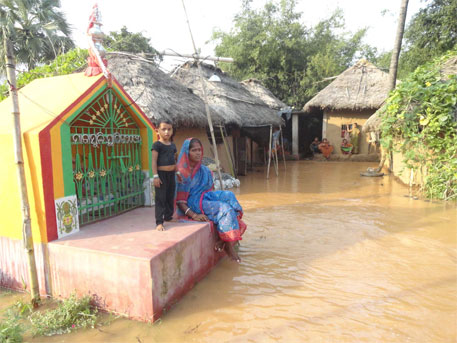 Women bear the brunt
Many community assets, including water points, have been destroyed by the floods. It is especially hard for the women responsible for collecting water for the household. "We now need to walk more than a kilometre to fetch water. It takes time for me to collect enough water for my family. I have to walk the thorny trail everyday to get water," says Rani Jena (45) of Siddhamath village.

Rani explains that if only she could access water closer to home, she would have more time to give to her children and to do other household chores. She says cleanliness is difficult to maintain because of water shortage.

Women and girls, who usually fetch water, also fear for their safety. "Water is often required at night, but it is dangerous to be walking alone in the dark at night. We often have to go without water," says Rani.
Revenue and disaster management minister of Odisha, S N Patro, says health officials and others are providing drinking water to the affected persons. “We instructed the water and sanitation department to provide drinking water through water tanks. The authorities evacuated 172,000 persons from flood-affected areas. At present, 348,000 persons have been affected and seven persons perished,” said Patro.

Two more Phailin babies
Meanwhile, the arrival of two babies in cyclone shelters in Kendrapada on Saturday, the day Phailin struck, brought some cheer amid gloom.

The newborns have been named Phailin. Jamuna Mallick (25) of Madhupada village in Rajkanika block delivered a baby boy at a cyclone shelter in the village on Saturday at midnight, three hours after cyclone Phailin slammed into the seafront, says Sarbswar Lenka, a village resident.

Another woman, Suchitra Pradhan (24), of seaside village Gupti gave birth to the girl at the cyclone shelter in the village. “We named her Phailin,”  says Bhabatacharana Sahoo, tehsildar of Rajnagar.