The recommended grain policy may help tackle the problem of plenty, but food insecurity will remain (Read full article) 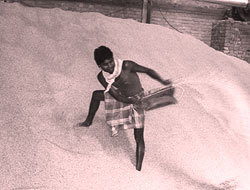 it is a paradox that has stumped the Union government. On the one hand, the central task force is flooded with requests for aid as the drought devastates state after state (12 at the last count). And, on the other, the country is saddled with a huge surplus stock of food grains -- 63 million tonnes as against the buffer norm of 24.3 million tonnes -- on which more than Rs 4 crore a day is spent as maintenance cost.

Ironically, all that is needed is to reach the surplus to the regions reeling under scarcity. At present, there are enough stocks to feed India's below poverty line population for a year and even help the country tide over the current crisis. Yet the government has failed to deliver the goods, as it gropes for an effective distribution mechanism.

In this regard, the report of the high-level committee -- constituted last year to devise ways to manage this surplus and suggest a long-term grain policy -- can come in handy. The panel, headed by economist Abhijit Sen, submitted its report to Union minister for consumer affairs, food and public distribution Sharad Yadav on July 31, 2002. The document lists out damage control measures for the future, but fails to address the food security issue. Indeed, it reiterates that India needs to have a comprehensive grain policy to ensure food security for 60 per cent of its population that is facing chronic malnourishment and hunger.

"The objectives of the present public food security system -- price stability, price support to farmers and efficient distribution -- cannot be ignored even in the future," says Sen.
The report observes that low consumption levels and political mismanagement of the public food grain procurement policy have spawned the mounting surplus. The high minimum support price (msp) is the main culprit, contends the panel, asking for an immediate reduction in the rates.

It states that the msp needs to be brought on a par with the actual cost of production (see box: The new deal). This includes all cash expenses borne by the farmer on seeds, fertilisers, pesticides, electricity, interest on crop loans, cost of hired labour and machinery, etc. For instance, the current cost of both wheat and paddy works out to around Rs 500 per quintal as against their corresponding msps of Rs 620 and Rs 560 per quintal, respectively.

Such high rates compel farmers to sell to the government and reduce demand. This forces official agencies to procure more grains to maintain the price. Consequently, the government ends up with a glut. "Purchases of grains should be largely left to private trade," avers Sen and adds: "We propose the role of Food Corporation of India (fci) as a buyer of last resort."
In India, the msp is often used to insulate farmers, beyond the required level, from the market forces of demand and supply. But this overprotective approach has boomeranged on the farmers, threatening their food security. Despite rising stocks, the government has continued to raise the msp and been on a grain-purchasing spree.

"The strong-arm tactics of the powerful farm lobbies in prosperous states like Punjab and Haryana have actually hurt a large number of farmers in other parts of the country," says R Radhakrishna, director, Indira Gandhi Institute of Development Research (igidr), a Reserve Bank of India-funded research body. Radhakrishna is also a member of the committee. Not surprisingly, the lion's share (91 per cent) of the government's total procurement takes place in the politically significant states of Punjab, Haryana and Andhra Pradesh. This implies that the benefit of msp does not percolate down to farmers in most parts of the country.

Its impact is, in fact, felt somewhere else. An analysis by the igidr shows that a 10 per cent increase in procurement prices of wheat and rice generates 15 metric tonnes of additional stocks. It leaves one lakh hectares of land devoid of irrigation facilities and lowers the gross domestic product (gdp) by 0.33 per cent in the third year.

The panel has also recommended decentralisation of the procurement system. "The fci should work towards evacuation from areas where state agencies are playing a strong role in procurement," suggests Sen.
Important measures have been mentioned for the grain off-take aspect as well. They include a reversion to the earlier universal public distribution system (pds), and fixing a uniform central issue price (cip) of Rs 4.50 per kilogramme (kg) for wheat and Rs 6 per kg for rice. The objective is to bring back many of the "poor and moderately poor" people, who do not fall under the 'below poverty line' (bpl) category, to ration shops.


When faced with a situation like the current drought, the government should not react in a knee-jerk manner (see box: Salvage operation ). The need of the hour is a delivery system to ensure food security. And in the long run, it needs to utilise the surplus in food-for-work schemes. This would create infrastructure in villages, at the same time enabling local people to attain livelihood security.

Chastened by a Supreme Court directive and in the aftermath of the starvation deaths last year, the government had decided to use surplus grains for poverty alleviation programmes. It had also stated that the food stocks would be utilised to create local assets such as ponds and undertake water conservation measures. However, the government has failed to act on its pledge.

Over the past year, for example, less than two-thirds of the 2.2 million tonnes allocated for food-for-work programmes to eight drought-affected states was used. The Uttar Pradesh government has not been able to spend even five per cent of its quota of grains even though the entire state has been declared drought-hit now.

This year the government wants to utilise close to Rs 5000 crore worth of grains under the Sampoorna Gramin Rojgar Yojana (sgry). In order to ensure proper implementation, the authorities will have to adopt effective methods that create food security in rural areas.

Agriculture scientist M S Swaminathan feels that in addition to integrated food-for-work programmes, grain and water banks should be set up in villages as insurance against food scarcity. Last year the Union government had, in principle, accepted this as a feasible way to make the country drought-proof. But the situation remains unchanged on the ground. As Sen said after submitting the final report, "Often recommendations remain recommendations, with the government failing to act upon them."

(With inputs from Binayak Das)