Tribunal will not consider cases more than five years old, point out victims and activists 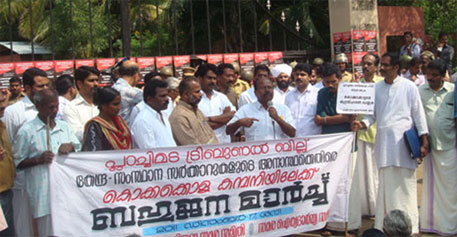 After sitting for more than three years on a draft legislation passed by Kerala State Legislative Assembly for ensuring compensation to the victims of Plachimada village in Palakkad district for the damage done by the bottling plant of the Hindustan Coca-Cola Beverages company, the Centre has asked the state to approach the National Green Tribunal (NGT).

The Centre has not forwarded the Bill to the President for assent.

In a letter received by the Kerala governor’s office a few days ago, the Union Ministry of Home Affairs (MHA) has stated that the Plachimada Coca-Cola Victims’ Relief and Compensation Claims Special Tribunal Bill of 2011 violates  powers of the NGT. The Centre’s argument’s is that environmental compensations come under the purview of the green tribunal, and the state does not have powers to form a separate tribunal to deal the issues.  Centre’s letter is based on the solicitor general’s advice.

The Bill, passed unanimously on February 24, 2011 by the state Assembly, was to adjudicate disputes relating to compensation of Rs 216.25 crore to be paid by the company for over-exploitation of groundwater, toxic contamination of soil, groundwater and water bodies, loss of agriculture and causing health problems in Plachimada. The Bill proposes to establish a tribunal to try all disputes for compensation and secure it from Coco-Cola company.

The Bill was formulated by the State Water Resource Department based on the recommendations of a high-level committee appointed by the state government to assess the losses in Plachimada. The committee submitted its report in 2010, estimating the loss at Rs 216.25 crore. It recommended setting up of a tribunal for settling the compensation claims.

Subsequently, the Bill was sent to the Centre in April, 2011 for the President’s assent. MHA, which was coordinating with other Central ministries—law, environment and forests, agriculture—for feedback on the bill, returned the bill to the state in September 2011. This was after it received a legal opinion from the counsels of Hindustan Coca-Cola Beverages, saying the Bill lacked constitutional validity. Kerala, however, has put its force behind the Bill and had clarfied that the state did have all the rights to pass the Bill.

Coca-Cola which came to Kerala in 1999 was forced to  close down its unit at Plachimada in March 2004 following continuous agitations by local communities, including adivasis.

“The Centre’s recommendation to approach NGT is nonsense,” says S Faizi, environment expert member in the high-level committee which indicted the company.  “We have been repeatedly pointing out that the issue cannot be debated in NGT because the tribunal has a time bar. The NGT Act requires the petitions for compensations to be filed within a period of five years, with a grace period of six months,” he points out.  The most serious damage to groundwater and toxic contamination caused by the Coca Cola company at Plachimada occurred between 2000 and 2004. It is more than five years and so the National Green Tribunal cannot be used to redress the problem," says he. The Centre seems to have succumbed to the pressure from the company, he adds.  “The company has been continuously sending letters to all the ministries concerned saying that the state does not have the power pass such a law and that with NGT coming into existence such a Bill is unlawful.

The company had in the past disapproved the process of passing the Bill, terming it flawed. According to the company’s official response made at the time of passing the bill in the state Assembly, the bill was devoid of facts, scientific data or any inputs from or consideration given to the company by the government. The company had stated that at no time it was offered an opportunity to present facts, engage in dialogue around this issue or share independent data before the bill was tabled or approved.

The Centre’s returning the bill has angered the residents of Plachimada, who have been agitating against Coca-Cola, demanding compensation for their loss and sufferings caused by the company.
“At every stage of our struggle for justice the company has tried to influence  the authorities and even the decisions of the courts,” says Vilayodi Venugopal, convener of the anti- Coca-Cola agitation committee. “The Centre has let us down while taking side of the company which has committed corporate crimes of over-exploiting our water, polluting our soil and causing agriculture loss and health hazards,” says he. The direction to approach the National Green Tribunal is a part of the concerted efforts to deny justice to the victims of Cola company, says he.

The Bill unanimously passed by the state and sent for President’s assent should have been submitted to the President within six weeks with the MHA’s recommendations.  What the Centre has done amounts to subversion of the the country’s constitutional process, say the victims.

The state government has not made any statement regarding the Centre’s response so far. The Law Department has forwarded the file to the chief minister, pointing out that the government can approach NGT or again resend the Bill for President’s assent. The government has sought the advice of the state’s advocate general on the next course to be adopted.