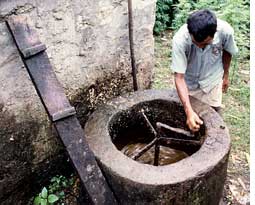 biogas plants don't function well when ambient temperatures are low and hence remain out of use for greater part of the year, in the hills for example. The plants are most efficient when the temperature of slurry--mixture of organic materials such as cow dung or plant waste--is 35-40C. Scientists have found that using plastic helps attain the desired temperature even when the surrounding temperature is low.

Typically, for biogas production, slurry is kept in a digester made of cement. Digesters are preconditioned tanks where anaerobic bacteria break down the slurry. The gas is then pulled out of the digester and used in generating electricity, heating and as fuel.

For the experiment, researchers from Madurai Kamraj University compared the efficiency of a biogas plant using a plastic digester with a greenhouse canopy and a conventional plant using a cement digester in a hilly region in Tamil Nadu. Plastic was chosen as the test material because it is non-corrosive, a good insulator for heat and can withstand operating temperatures and prolonged exposure to sunlight, said K Vinoth Kumar, a researcher.


They found the plastic digester produced an annual average slurry temperature of 26.3C, which was 3.9C higher than the conventional plant and 9.3C higher than the ambient temperature. Also, the annual average amount of gas produced by the experimental plant was 11.5 per cent more than the conventional plant. The solar-assisted plastic greenhouse biogas plant design was found to be profitable as well. "The plastic biogas plant is relatively cheaper to fabricate," Kumar told Down To Earth. It lowered construction and maintenance costs as well, besides being long lasting. Plastic digesters come for about us $145, whereas conventional designs range from us $175-265. Cement digesters may crack over time, which could reduce its ability to retain heat, said the paper available online since April 14 in Solar Energy's website.

Ajay Chandak, founder of prince, a volunteer-based group that promotes use of renewable sources of energy, agrees a plastic digester will help. He suggests that using solar hot water panels to heat water that is circulated through the slurry would also be "very effective" because the temperature of the slurry is raised directly. Kumar believes there is ample scope to employ plastic for biogas plant construction and further research will substantiate the approach.