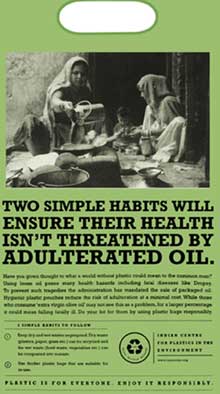 The Maharashtra government's proposal to ban plastic bags has galvanised the plastic industry into action. The Indian Centre for Plastics in the Environment (icpe), a non-governmental organisation (ngo), has taken up cudgels on behalf of the industry by issuing quarter-page advertisements in various Mumbai newspapers -- in public interest, they claim. One such ad shows two poor women cooking food on a chullah with a small child besides them. The ad reads: "Two simple habits will ensure their health isn't threatened by adulterated oil." Another ad shows barren land with four chopped trees. This one reads: "Two simple habits will ensure that this isn't the Earth your children inherit." The ads then go on to explain their point: plastic bags, they claim mean a lot to the 'common man' because "hygienic plastic pouches reduce the risk of adulteration [of cooking oil] at a minimal cost."

Alternatives to plastics are criticised as expensive and if adopted "trees will be felled in larger numbers". So far, so good. But if the icpe is to be believed, two simple habits can solve all plastic-related problems. One, keep dry and wet wastes segregated; the former can be recycled and the latter composted into manure. Two, use thicker plastic bags that are suitable for re-use. The plastic industry has been sermonising on these habits for many years now. It hasn't solved any problem. How could they when municipalities work against segregation? Sunita Patil of Stree Mukti Sangathan, an ngo working with Mumbai's over 2,000 women waste pickers explains: "The Municipal Corporation of Greater Mumbai did give bins to households to segregate waste. But this segregated waste was again mixed up in the municipal truck and simply dumped. Though on paper, two separate trucks were designated for wet and dry waste, in reality no one cared." Patil adds that the municipal workers then segregate the recyclables from the mixed waste and sell it for a tidy sum. Shouldn't the plastic industry spend some energy and finance on tackling such real issues, rather than issuing ads. In public interest, that is.