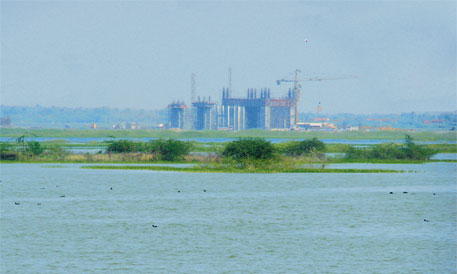 The vacation bench of the National Green Tribunal (NGT) on Thursday rejected the plea for staying fresh site inspection of the controversial Nirma cement plant in Bhavnagar, Gujarat. The tribunal had earlier passed orders for a fresh site inspection by two of its experts in view of contradictory reports submitted by previous expert committees. This was opposed by the Union environment ministry as well as the residents' body opposing the cement plant—Mahuva Bandhara Khetiwadi Paryavaran Bachav Samiti. The bench chaired by Justice P Jyotimani rejected applications of the Samiti and the ministry, which had sought stay on the tribunal's order of May 28, and imposed monetary penalty on both. The NGT order dated June 6 noted that the "applications are vexatious and abuse of process of law. We strongly deprecate the conduct of the applicants since such stand taken by them would result in a disastrous situation. Accordingly, we dismiss the applications with cost of Rs 1 lakh to be deposited in Legal Aid Cell, NGT Bar Association, jointly by both the applicants within a period of two weeks from the date of receipt of the order.


The Nirma case was taken up for hearing by the vacation bench of NGT because the fresh site inspection, on which the stay was sought, is to take place between June 7 and 9. The May 28 order passed by the bench chaired by Justice Swatanter Kumar, had directed that two expert members of the tribunal, D K Agarwal and G K Pandey, shall visit the site from June 7 to 9. The site inspection, the order noted, was necessary “keeping in mind the fact that four Experts’ Reports have been filed on record of the Tribunal and there are contradictions in the said reports.” “It is necessary for the Tribunal to know the exact state of affairs on the site, particularly with reference to wetland, water bodies, bundhs/bandharas and adverse effect of the project on them, if any.”

Counsel for respondents of both the Samiti and Union Ministry of Environment and Forests (MoEF) expressed dismay over the timing of the order and the schedule for inspection.

The Samiti filed its stay application on Wednesday, and sought stay on the inspection for eight weeks. MoEF filed its application on Thursday.  It was argued by the counsel that the May 28 order “was given without any formal pronouncement”, as the case was listed for hearing on July 8. Anand Yagnik, counsel for the Samiti, said the order was given at a time when the Supreme Court is in recess, which does not allow the respondents to file an appeal before the apex court.  He referred to Section 22 of the NGT Act, which states that any person aggrieved by any award, decision or order of the Tribunal, may file an appeal before the Supreme Court within 90 days from the date when it given.

The timing of the site visit was also disputed. “The entire Saurashtra, which includes the site in contention, was declared a drought-hit area because of less than 40 per cent rainfall last season. Given the climatic conditions of the region, the reservoir gets filled only during the post monsoon season. Therefore, the timing of the site visit in June, the pre-monsoon period, will be of no help to ascertain the nature of the water body,” Yagnik contended. Similar concerns were expressed earlier also by Raj Panjwani, who had appeared on behalf of the resident' body before the Tribunal. He had said that if a site visit has to be carried out, it should be during the post-monsoon period. The bench responded that they have no bias regarding such timing, and “if required after the scheduled site visit, a post-monsoon site visit will be conducted”.

Yagnik also contended that Justice Kumar had served in the Supreme Court bench that had heard the case, and thus has complete knowledge of the facts, on basis of which the clearance was revoked. Yagnik also considered the May 28 order to be vague, as it does not clarify on what issues the Tribunal finds the earlier expert Committee reports to be contradictory, nor does it clearly outline the terms of references of the site visit.

The NGT order was given on an appeal by Nirma against the order of the Union Ministry of Environment and Forests (MoEF), revoking the environmental clearance that was given to the company’s cement plant in December 2008. The issue of a fresh site inspection by expert members of the tribunal has been under deliberation since February this year.  But the fresh inspection was strongly contested by counsel appearing on behalf of MoEF and residents' body. The tribunal then appeared to soften its stand regarding the site visit and agreed to the filing of affidavits by the respondents. However, the May 28 order, given precipitously, raises concern about the deliberation over the affidavits.

Counsel of MoEF is now in the process of filing a civil application before the Supreme Court against NGT's site visit order.