Caught between floods and poachers, one-horned rhinos live on the edge 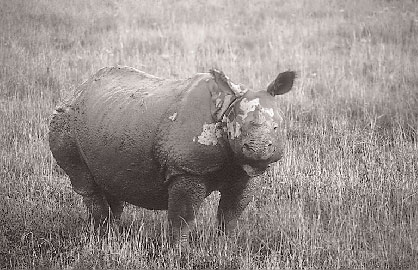 THE one-horned rhinoceros at the Kaziranga National Park is facing a serious threat not only from floods in the Brahmaputra river but also from poachers who are hunting down animals trying to escape the deluge. The park is home to 1,500 one-horned rhinos. More than a quarter of the 430 sq km sanctuary has been submerged under floodwaters. At least a dozen endangered animals have drowned and few others, who had strayed on to the national highway, trying to escape the floods, died after being hit by speeding vehicles.

“Patrolling has been intensified on the highway to caution drivers, while forest guards have fanned out to adjoining hills to help save the animals from poachers,” D D Boro, a park warden told reporters. Last year, at least 500 endangered animals, including 50 rhinos, were killed during the floods. This year five rhinos have already been killed by poachers. The profit margins in the rhino horn trade are staggering. Syndicates pay villagers about Rs 50,000 for each horn. n